Articles
You are here: Home / Articles / Christian Persecution / Pakistan. $100,000 will be awarded to the person who kills the maker of…

Federal Railway Minister Ghulam Ahmed Bilour announced that $100,000 will be awarded to the person who kills the maker of the anti-Islam blasphemous film “Innocence of Muslims”. Speaking to the media on Saturday, Bilour said that there was no other way to lodge a protest and instill fear among the blasphemers other than murder of the filmmaker. “I request all the rich people to bring out all their money so that the killer can be loaded with dollars and gold.” 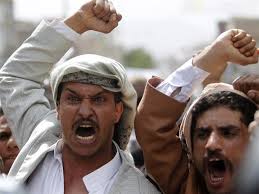 The minister admitted of knowing that he was committing a crime by instigating people for murder, but said that he was ready to be a criminal for this cause. “If there is a case lodged against me in the international court or in this country’s court, I will ask people to hand me over to them… I want to show these countries that we will not tolerate any such things.” He added that if he is punished, the country should not end ties with the US as this was a matter between him and his prophet. He also commented on the burning down of a church in Mardan by protesters on the Ishq-e-Rasool Day and expressed grief over the incident. “The minorities over here, the Christians and the Hindus, they are all our brothers. They are also Pakistani.” Traders’ association Sheikhupura announces Rs5m reward The Markazi Anjuman Tajran (MAT) Sheikhupura announced a reward of Rs5million for the person who kills the maker of the anti-Islam film, The Express Tribune has learnt. MAT Sheikhupura President Muhammad Pervez told The Express Tribune that the association has unanimously taken this decision and the announcement is not his individual act. Pervez said that the members of the association are ready to sacrifice their parents, children and properties for Prophet Muhammad (pbuh) and will never tolerate the act of the filmmaker of blasphemous movie. (tribune)

Thousands of Muslims burned down a Lutheran church as well as its school and adjacent homes in Pakistan Friday, September 21, injuring several Christians in violent protests against an anti-Islam film that elsewhere killed dozens of Pakistanis, church sources and rights activists told BosNewsLife. In published remarks, Lutheran Bishop Humphrey Peter said a crowd of some 8,000 people, many of them carrying petrol, attacked the St.Paul Church complex in Mardan city in Pakistan’s North-West Frontier Province. Several people staying inside the church complex were beaten, added WVIP Executive Director Farrukh H. Saif. Saif suggested that many more people could have been killed or injured in Friday’s church attack. “Nearly 500 students are studying at the primary and secondary school of the Lutheran church. But nobody was there now because it was a holiday in Pakistan,” he told BosNewsLife.

Saif said that elsewhere in Pakistan at least 22 people died in clashes between Muslim protesters and security forces. Additionally “hundreds were injured,” he said. More than 100 were wounded in Karachi alone, according to Allah Bachayo Memon, spokesman of the chief minister of Sindh province. He told reporters about 20 vehicles, three banks and five cinemas were set on fire.

Security forces reportedly fired in the air in Peshawar and the eastern city of Lahore to keep protesters away from U.S. consulates. Police also fired tear gas at about 1,000 protesters in Islamabad, news reports said.

Violence has erupted in Pakistan and other nations after excerpts of the “Innocence of Muslims” movie were posted on the video-sharing YouTube website in English and Arabic.

Tunisia’s Islamist-led government said it too had banned protests against the images published by French satirical weekly Charlie Hebdo. That decision came after four people were killed and almost 30 wounded when the U.S. embassy in Tunis was stormed last week in a separate demonstration over the anti-Islam film.