Muslims in Syria have butchered 400 people in mass killing fields, and have also impregnated 3000 women through sex jihad. We have learned this information through our Middle East contact Sister Hatune Dogan, who we partnered with in order to rescue Christians in Syria and Iraq, Turkey and Jordan.

“Abd Alluhud tells his story driving to his farm, taking the regular route near Idlib and what he sees was so horrific; hundreds of bodies on the side of the road, all decapitated”, so reports Sister Hatune Dogan to Shoebat.com after she came back from her mission to aid Christians in Turkey where she interviewed several Christian refugees who came out of Syria.

Terrified of what he witnessed Alluhud later decided to take the long route to avoid the horrific scene. What he saw was the same: hundreds more bodies lined the road with dogs consuming the carcasses of slaughtered victims for whom the jihadist group Da’ish would dig a small pit, slice the neck and drain the neck in the pit making sure the bodies are bowing in the form of submission.

Syria from Theodore Shoebat on Vimeo.

Alluhud is now getting treatment in Turkey. He looses control and slams his fist to the point that it’s fractured.

“There were minimum around 400 bodies that he saw”, said Hatune. 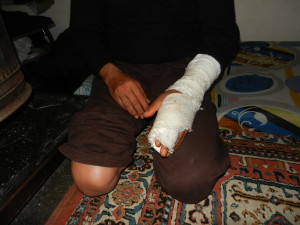 Alluhud’s hand in a cast, from continuously slamming his hand from nervous breakdowns

Shoebat.com was also able to obtain a video of a man being executed in Syria for converting to Christianity:

The massacres are accumulating more and more, and with this toppling mountain of blood, comes the obligation to help save the persecuted. Please make a donate to save Christian lives in Syria.

Besides the dead, many of the living behave as if they are living dead; slaughter houses are everywhere, killing centers, people being baked alive, headless bodies, mass sex jihad and the kidnapping of young girls. Shoebat.com has obtained numerous videos of the testimonies of people in Syria recalling the horrors they have seen.

In the following video, a Christian woman describes how her own son was beheaded by Muslims and then buried by his murderers:

In this one video, a woman tells how multiple rebel groups were passing by her area searching for women to steal:

In this interview a woman recalls how a man was savagely decapitated with a knife:

In this video a witness recounts how an Alawite woman was stripped naked, forced to walk the streets, and then beaten almost to death:

Sister Hatune tells the story of 19 year old Muhammad A. who decided to defect after seeing his mate blow himself up in a suicide operation in Hidaya Hotel in Qamishlo on March 11, 2014 which killed 3 Christians amongst others.

Muhammad, who was designated to be the third to detonate lost hope that a martyr could be with virgins after seeing that the body of his previous suicide martyr colleague did not have his genital parts due to the explosion. “He was so distressed” Hatune reported to Shoebat.com, and “I didn’t have time enough to share the Good News of the Gospel with him because I know he would be willing to leave Islam” she said regrettably. He told Hatune of the training centers in Orfa, Ghazi Antab and Antakia (Antioch) set up by the Turkish government for more terrorists to be sent to Syria.

They have set up the “Khuda (God) Party” which is aligned with Daish (ISIS) composed of Kurdish rebels and foreigners. In many mosques, the call of the Imam was to send young girls for Jihad Nikah (pleasure marriages) for the fighters. Hatune told Shoebat.com that at least 3000 girls have been sent home pregnant and new waves of fresh shipment will be sent to sexually encourage the fighters.

The brutality never stops, nor do the endless testimonies of Syrians retelling the violence they have seen. Shoebat.com discovered this video of a man lamenting on how Muslims butchered his wife and numerous of his relatives and friends, including a one year old infant:

Mass decapitations are also being done almost in a systematic level, as this man describes in this video:

“Europe and the U.S. rejects many of these Christians fleeing”, reported Dogan to us adding, “an entire Christian family of 14 drowned in a boat trying to escape to Greece.” Christians have been reduced from 4 to 1.5 million in Syria. In Raqa, where the ISIS (The Islamic State of Iraq and Syria) have completely taken over and there are virtually no Christians left. Sounding church bells has been outlawed and non-Sunnis must pay 17 grams of gold for Jizzieh tax. Anyone who fails to pay, they must then provide a daughter and if no daughter is available, his wife. One Shiite lady who failed to cover her arms was given 40 lashes in public.

“All the reports about U.N. relief to Christians is failing” said Dogan adding “out of all the trucks very little was sent to Christians, the Kurds and others got everything.”

“We also rescued 2 more kidnapped Christians on this trip” she told us joyfully. The Christians were sold to Kurds who sold them at a $1000 each to Dogan’s affiliates. 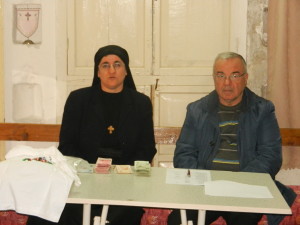 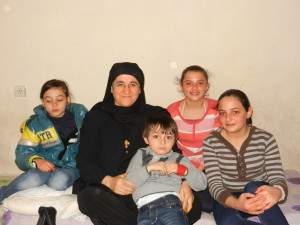 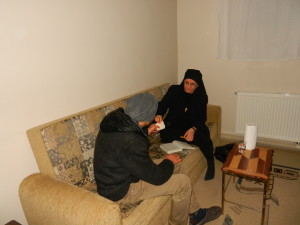 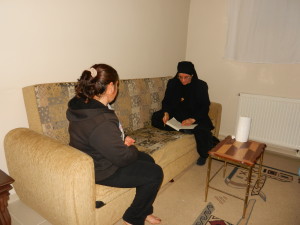 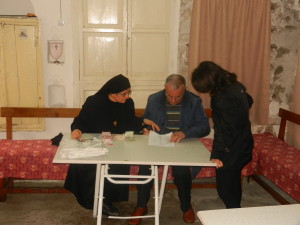 These pictures are a witness to the work we do in Syria to help the persecuted, and protect them from Islamic attacks and deplorable violence. We cannot continue to save Christians without your help. This is your opportunity to support us with the absolute knowledge that you are saving lives. Please donate to save Christian lives in Syria and Iraq.

Bangladesh. 100 people killed in clashes since February – Bloggers and journalists have been beaten and hacked to death.
Syria. Death toll has reached at least 60,000
Christians Petition To Support Persecuted Brethren In North Korea
Syria. Christians fear the loss of their privileged status and position in a post-Assad Syria.
Syria. “There is no safe place left in Syria … choose between: die or leave.”
Indonesia. bomb detonated near a church in Pamona Timur, second bomb targeted home of Christian.
Egypt. Army foiled attack on church in North Sinai on the eve of Coptic Christmas.
Pakistan. Julie Aftab, victim of an brutal acid attack, finds new live in Houston.
1 comments

Well done and thank you for being bold and faithful. We ALL should be helping and putting an end to this. We should be praying in every church service nationwide for our brothers and sisters. How can we make this happen?