Articles
You are here: Home / Articles / Christian Persecution / Egypt. Army foiled attack on church in North Sinai on the eve of Coptic… 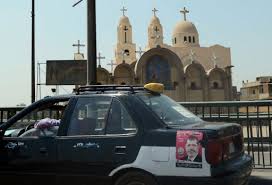 Egypt’s Coptic minority is celebrating their first Christmas under the rule of Islamist President Mohammed Morsi, amid fear and uncertainty for their future.

Egypt’s army foiled an attack on a church in North Sinai on the eve of Coptic Christmas, a spokesman said on Monday, as Pope Tawadros II prayed for security in the country.

Egypt’s Coptic minority is celebrating their first Christmas under the rule of Islamist President Mohammed Morsi, amid fear and uncertainty for their future.

Armed forces spokesman Colonel Ahmed Ali said that army patrols discovered a car carrying explosives between a church and a military checkpoint under construction in the early hours of Monday.

The armed forces “have foiled an attempt to bomb the Rafah Church in North Sinai,” he said.

Another car, which had no license plates and carried masked men, escaped before troops could stop it.

In his sermon late Sunday in Cairo’s Cathedral, Pope Tawadros II said that he prays for Egypt’s security.

“Egypt is always in our prayers. We do not just pray for the land, we pray for the people,” he said in a Christmas Eve mass.

Pope Tawadros II was elected in November to replace longtime Pope Shenouda III, who died in March after 40 years as the head of the largest Christian community in the Middle East.

Copts, who make up around 10 per cent of Egypt’s 82-million population, long complained of discrimination during the regime of Hosny Mubarak. They fear further marginalization by Islamists, who rose to power after the ouster of Mubarak in 2011.

Indonesia. Church in Setu in Bekasiwas demolished on Thursday afternoon.

Sudan. For thousands of Christians the storm clouds are gathering…

Activist: Christians are by far the most persecuted religious group around the word

Iraq. Since the fall of Saddam Hussein 10 years ago, an estimated 1,000 Christians have been killed.

Nepal. caller threatened to bomb church if they did not give money.