Articles
You are here: Home / Articles / Christian Persecution / A Video That Will Make You Weep – Iraqi Man Purchasing Sex Slave… 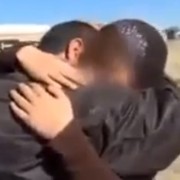 A crime, you think?

He buys them then unites them with their husbands and fathers and family. Here is one example that will touch any human heart. In this story a Yezidi girl who was taken as a sex slave by ISIS. The man acts as a dealer, infiltrates ISIS and purchases the girl and then unites the girl to her father as you see in this scene:

It’s the story of you, all the gracious loving partners with Rescue Christians. You would read the story of Moses and the Hebrews enslaved by Pharaoh and at times wonder where you stand in the big picture in God’s magnificent plan. How will you rescue all these Hebrews out of slavery?

Well, you already are. You are Moses. You are Aaron. You are Joshua. Just think about it for a moment.

You have supported the release and security of thousands of Christians, especially in Pakistan where Christians are enslaved in brick kilns. Kilns are the very operations the Egyptians forced the Hebrew slaves to labor in ancient Egypt and today the very operations that enslaved the Hebrews in ancient Egypt are happening as we speak to your very Christian family in Pakistan. These are your brothers and sisters in the faith. They are part of the kingdom and bride of Christ. They are whom Christ, the final Moses speaks about in Matthew 25 “for I was hungry and you gave me food, in prison and you visited me …” Imagine the day you meet Christ, the master and Lord of the Church. What a wonderful day will it be.

A Kiln worker is paid 450 Pakistani Rupees, the equivalent of $7 U.S. dollars per 1,000 bricks. Just imagine. And in some areas of Punjab the rate is even lower, at 230 rupees per 1,000 bricks which is about $3 U.S. dollars regardless of how long and how many members of the family it takes to complete the task. The tasks include fetching mud, soaking it in water, molding it into bricks, transporting the finished product to the kiln and finally baking and grading each brick. This is not much but there is another issue – “credit line acts as a noose”.

In case of severe weather or illness, workers earn nothing and are forced deeper into debt, begging for loans from their employers who are happy to extend the line of credit, which tie the laborer more tightly.

Our directors for Rescue Christians you partner with in Pakistan, purchases these slaves and unties families from other kilns and releases them form slavery.

Indeed, just think about it, the irony that you are in the slave trade business, yet at the same time, you are Moses.

According to our partners in Pakistan, the kiln owners usually extends loans for occasions such as marriage, births and deaths, in an effort to tie the laborers more tightly into servitude. This action is totally illegal and under the law, a kiln owner can only release an advance equal to or less than two weeks’ wages. But then there are slave owners and then there are slave owners; you.

Is it good enough just to be informed? Consider being a partner in saving the lives of Christians in Muslim countries, click here for details.

You – our donors – have provided the money for safe houses and the ability for the families to regain their freedom and dignity. Thank you Rescue Christian Donors and partners; we could not have helped without your support.

God bless you all. We, the Middle Eastern and Pakistani Christians love you.

After being stationed in Iraq in Mosul in 2004/2005 I had many dealings with the Yezidi. These people where beyond the nicest people you could run across throughout the country and it has made my stomach turn when first hearing of them being pushed from their homes. There are good people everywhere, however, God is working through this man to reunite these kidnapped women with their families. I am sure there are more like him there. I pray that all of these young girls get back to their families unharmed and recover from the horrors they are facing and have faced. Regardless if they are Christian, Yezidi, or Muslim, none should have to go through this ordeal. Lord, Be with each of these families and keep them strong and their faith in the Lord strong. He will prevail.

Does anyone have the web site for Npu militia

Amen!! PRAISE OUR KING JESUS for everything good work that you are all continuing to do, for all of the good fruit you are baring for the Kingdom of Heaven!!

Thank you all so very much!! You have the support and prayers of many of the brothers & sisters in Christ our Lord, from all over the world wherever we may be; so blessed to have freedom to help others achieve the same!!!

May The Good Lord continue to bless the works of your heart and your hands!!! I'm so encouraged by the work you all do for The Lord and for all of our fellow brethren in The Faith. May the blood of Christ Jesus and the Angels of our Heavenly Father protect you all. The Grace and Peace of God be with you all!!!

Rescue Christians. Thank you for all of your hard work. Praying for each and every one that is involved.

Your comment:Well, you already are. You are Moses. You are Aaron. You are Joshua. Just think about it for a moment.

Wow. Never ever have I ever thought of myself in that way. Those are powerful words. Love you and everything you do.

We're watching and praying in Oklahoma.