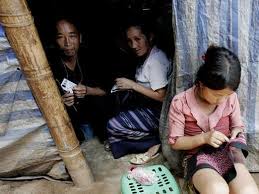 Approximately on October 4-5, 2012, the village elders of Vongseekaew village in Phin district of Savannakhet province attempted to subject approximately 50 Christians (13 families) to undergo traditional animistic rituals of making oath and drinking “sacred water” that had gone through ritual incantation by a spirit medium. By participating in the rituals, the Christians would be viewed as making public statements that they are adhering to the village’s traditional religion/custom and follow the path of their ancestral spirits, thus forsaking the Christian faith that they had received about two years ago. The elders maintained that the right to residence in Vongseekaew is tied to their undergoing the rituals.

After numerous attempts on the part of the village elders, Christians still refused to participate in the rituals. Thus, the elders publically declared that Christians therefore had forfeited their right to residence in Vongseekaew village. They were thus ordered to evacuate the village immediately.

Several days later, the Lao authorities, comprising of the head of Jutsume sub-district Mr. BOUNHEUNG and the Jutsume sub-district Community party secretary Mr. BOUNGONG, arrived at Seekaew village. They further harassed Christians by threatening to seize and tear down homes of the Christians if they continue to refuse to undergo the rituals and cease to follow the Christian faith.

Then, approximately on October 8-9, the Phin district chief, the district religious affairs, and the district police and military organized a public meeting in Vongseekaew village. The district chief declared that residents of Vongseekaew could freely adhere to any religion of their choice, including Buddhism, Christianity, and animistic religion. The chief further instructed that no one should stop others from following the religion of their choice.

Thus far, things have been quite in Vongseekaew as Christians are trying to hold on to their Christian faith. However, eight kilometers away in Allowmai village, authorities are trying to coerce Christians to undergo the traditional animistic rituals and forsake the Christian faith. Phin distric police officials further threatened to continue imprison Pastors Bountert, Adang and Onkaew for 2-3 more years if Christians in Allowmai do not recant of their faith and undergo traditional anmistic rituals.

Nevertheless, the Lao Christians in Seekaew still remain faithful to their Christian faith.