Articles
You are here: Home / Articles / Christian Persecution / Iran. Trial of five Christian prisoners was held eight months after their…

The initial trial of five Christian prisoners was held in Shiraz with two of them being absent from the court session. Also, a tragic incident in the last minutes of the trial prompted the release of one of the prisoners on a heavy bail.

According to « Mohabat News » reporters, the official trial of five Christian prisoners was held on October 15, 2012 eight months after their arrest. The trial was held at branch 3 of the Revolutionary Court in Shiraz, and was judged by Mr. Rashidi.

Homayoun Shokouhi and Fariba Nazemian were absent from this trial and were not transferred to the court building at all, due to unknown reasons.

The other three Christian prisoners, Mojtaba Hosseini, Mohammad-Reza Partoei (Kourosh), Vahid Hakkani, were transferred to the court at 10 in the morning with their hands and feet chained together. This use of handcuffs and chains for prisoners of conscience and political prisoners is illegal according to the regulations of prisons in Iran. The way they were transferred to court is the way that is used to transfer murderers. Foot chains are usually used for murderers in Iran. The three Christian men were chained together so tightly that they were hardly able to walk.

The court session was held behind closed doors and the families of these Christians were prevented from entering the court room.

The court session began with the Christian couple, Homayoun Shokouhi and his wife Fariba Nazemian, being absent. The judge asked the defendants a few short questions and postponed the trial merely because the other two defendants were absent.

It should be noted that Mojtaba Hosseini and Homayoun Shokouhi had been arrested in a house church by security authorities in 2008 for their Christian faith. The Revolutionary Court gave them a suspended sentence at that time.

The defendants were transferred to the infamous Adel-Abad prison after the session was over. Their hands and feet were chained again on the way back to the prison. Obviously they will remain in uncertainty until their next trial is held.

A Bitter Incident After the Court was Over

The Mohabat News correspondent reported a sad incident happened just moments after the trial was over and explained, “The Christian couple’s (Homayoun Shokouhi and Fariba Nazemian) son, Nima, was waiting outside the court room hoping to get a chance to meet his parents on their way out of the court after not seeing them for months. Nima didn’t know his parents were not brought to the court. He waited a long time, but didn’t see his parents. The 17 year old teenager, suffering from epilepsy, had a seizure as a result of the mental pressure that was on him. He passed out in the court’s corridor. Seeing this, court officials and people in the court building called an ambulance.

The judge also saw the crowd and saw what had happened. So, he asked to bring Nima’s mother, Mrs. Fariba Nazemian, upon the request of their family and friends.

Helma, 12 years old, and Nima, 17 years old, are children of the Christian couple, Homayoun Shokouhi and Fariba Nazemian. The couple is being held in prison for months because of being Christians. It should be noted that Nima was also arrested when his parents and other Christians were arrested. Nima together with two other Christian convert residents of Shiraz were temporarily released on a 100 million Toman (approximately 82,000 USD) bail after 36 days of uncertainty in custody. 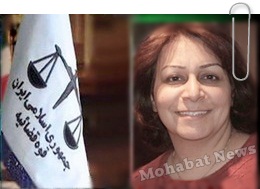 After some hours agents brought Mrs. Nazemian before the judge. Asking questions about Christianity, the judge asked her to denounce her faith in Christ and repent from her current faith so that she could be released to go home and take care of her children. Mrs. Nazemian, however, insisted on her faith and rejected the judge’s offer.

Therefore, considering the sickness of the Christian lady’s child and his need to be cared for, the court issued her release order on a 250 million Toman bail (Approximately 204,000 USD). The Christian lady’s friends provided the bail in form of title deed of a property and she was temporarily released.

After issuing the temporary release order, the Christian lady’s charges were announced as “forming an illegal group in favor of groups opposing the Islamic regime, acting against national security and insulting holy Islamic figures”.

Also, according to published reports, seven non-Trinitarian Christians have been arrested by security authorities. The Fars semi-official news agency which is supported by the Revolutionary Guards confirmed their arrest in a report and said, “Four illegal networks known as “house churches” were discovered in Shiraz and Kavar and their primary leaders were arrested.”

The news agency mentioned those arrested as being from vulnerable groups of society who are suffering from mental and in some cases financial issues. The report affiliated the house churches with Jews and Israeli security organizations without providing any evidence or proof. (mohabatnews)