Articles
You are here: Home / Articles / Christian Persecution / India. A History of Violence

Although Christianity has existed in India for more than 2,000 years, only 2% of its population is Christian, a great minority amidst the remaining population of Hindus (80%) and Muslims (13%).

Statistics by Christian groups in India clearly indicate that there has been no let up in the systematic persecution of Christians ever since it began in 1998, the year the Right-wing Hindu Bharatiya Janata Party (BJP) formed a coalition government at the federal level. The BJP’s emergence coincided with the arrival of Mrs Sonia Gandhi, a Catholic and the wife of the late prime minister of India Rajiv Gandhi, in national politics. Her appointment as the chief of the Indian National Congress party led to the political targeting of Christians by the BJP and associated Hindu nationalist forces under the pretext of religious conversions.

From 2001 to 2004, at least 200 attacks on Christians were reported each year. There were around 165 anti-Christian attacks in 2005, and 130 in 2006. The following two years, 2007 and 2008, turned out to be the most violent years, vis-à-vis Christian persecution, since the Independence of India in 1947. During the Christmas week of 2007, at least four Christians were killed and 730 houses and 95 churches torched in Kandhamal, Orissa. A repeat of violence in Kandhamal killed over 100 people and burned 4640 houses, 252 churches and 13 educational institutions in 2008. Apart from these major incidents, 2007 and 2008 each saw around 200 attacks in various parts of the country. The year 2009 witnessed more than 152 attacks, and 2010 saw at least 149. The actual number of incidents is likely to be much higher than reported, as not all cases are formally registered or come to light.

While it is good that the Indian voters are disapproving of the use of Hindu nationalism by political parties – as was evident in the defeat of the BJP in the last two general elections in 2004 and 2009 – it may not bring much respite to the minorities. For India’s Hindu nationalists are expedient enough to adjust their strategies to suit the political mood of the country while continuing to further their agenda at a different level. It is an open secret that while there are a number of Hindu nationalist groups, some having separate legal entities and others informal groupings, they all are linked to the Rashtriya Swayamsevak Sangh (RSS), the leader of the movement and the ideological mentor of the BJP.

The Hindu nationalists may not let their activities become a political issue now, but they will continue to spew hate against Christians, alleging that they are converting Hindus to Christianity by inducement and coercion.

There is talk about Hindu nationalists using a moderate form of their ideology, but one essential characteristic of Hindutva, a Hindu nationalist ideology, that has remained non-negotiable for them over the years, is that non-Hindu minorities, particularly Christians and Muslims, cannot be accepted as true Indians unless they become “Hindu”.

The Hindutva ideology was articulated at a time when independence from British rule was foreseeable during the early 20th century. It was inspired by several Hindu reform movements that were birthed during the second half of the 19th century to counter “Western superiority and supremacy” that was being used to justify colonialism. At the heart of the Hindutva dream was a “nation”, as it existed before the “Muslim invasion” by Central Asian powers in the 12th century followed by the “Christian invasion” from Britain in the 18th century.

Subjected to this ideology, many Indians – especially sections of the people in the states where the BJP and other groups have built a strong support base, such as Madhya Pradesh, Chhattisgarh, Orissa, Karnataka and Andhra Pradesh – see minorities as “outsiders” and approve of violence as a means to oppose “conversions”.

The Hindutva ideology is still being propagated in many parts of the country, especially by pragmatic Hindu nationalist workers. But some of them have lost hope that the Hindu nation can be a reality if they use democratic ways. They have turned more extremists and are waging a war against the minorities with underground terrorist activities. Investigation agencies have arrested and are prosecuting several extremist Hindu nationalists for exploding bombs targeting minorities, mainly Muslims. Those facing terrorism charges have reportedly been behind anti-Christian violence as well.

It is difficult to anticipate how the recent development of Right-wing Hindu terrorism will play out in the future, but it seems almost certain that pragmatic Hindu nationalists will remain as active as, if not more than, they have been in the past – though in a fashion that does not attract too much attention. This will mean more attacks but less coverage by the mainstream media, which tends to look at the magnitude of an attack and fails to see it as part of a trend.

The best way to counter this new Hindu nationalist strategy is to streamline the reporting of Christian persecution and highlight statistics periodically. This may require compilation of incidents by one Christian agency which can diligently verify reports of attacks using high standards of professional, ethical reporting. (Source Visionnetwork) 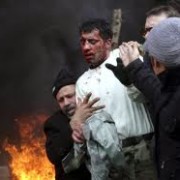 Sudan. “We will never forgive Christians for not being Muslims”…

Al Jazeera call Muslim world to damage the U.S. economy and to kill the Jews ‘down to the very last one’.

Belgium. Brussel the “Capital of Europe” is now the most Islamic city in Europe.