Kaduna State was thrown into another round of pandemonium following a suicide bomb blast that rocked the Saint Rita’s Catholic Church at Ungwa Yero in Malali, Kaduna North LGA. The church has a capacity to accommodate over 1,000 worshipers.

The blast, which affected mostly women and children, killed at least 4 people and severely injured about 150 including the parish priest, Rev. Fr. Bonet Micah.

The News Agency of Nigeria (NAN) reported Monday that 146 victims were admitted at Barau Dikko, St. Gerard’s and 44 military Hospitals in Kaduna.

However, only 35 of the injured were still receiving treatment at the three hospitals as at Monday.

The figure was released during a visit to the hospitals by officials of the state chapter of the Christian Association of Nigeria (CAN).

According to the administrator of St Gerard’s Hospital, Sister Therasa Dung, 14 victims were brought to the hospital and two had been discharged.

Dung said four of the victims on admission at the hospital were children.

At the Barau Dikko Hospital, the CAN officials were told that out of the 97 victims of the bomb blast, only 18 were left.

The team leader of the International Committee of the Red Cross, Mr. Aly Ouattara, who was seen treating some of the patients, said the hospital had discharged 79 patients, who were in stable condition.

Also, officials at the Army hospital confirmed that 30 patients had been discharged while five were still receiving treatment. The location of the church is more or less like a border separating the Kwaru, Badarawa and Ungwa Yero areas; while Christians dominate the Ungwa Yero axis, Muslims dominate the other areas. They are normally flashpoints during any crisis in Kaduna.

LEADERSHIP had reported, prior to the Sallah celebration, that there could be security threats during the Eid-El-Kabir celebration, but a top security operative told our correspondent that all flashpoints had been properly manned across the state.

According to eyewitness accounts at the scene of the blast, the suicide bomber came in a tinted Toyota jeep and was led by a motorcyclist who, apparently, was showing him the way leading to the church. 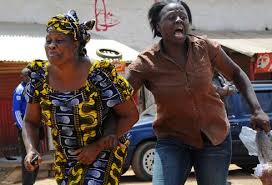 A security source in Kaduna confirmed that some other people were attacked and killed immediately after the terror attack. The sources said security agents tried to manage the tense situation in order to avert escalation of reprisal attacks.

He disclosed that the attacker rammed his car through the wall and inside the church before the explosion. He stated that five worshipers died on the spot and that four of the seriously wounded parishioners died in the hospital later. (AllAfrica)