Separatist Islamist rebels released a Swiss Christian woman kidnapped by a private militia on April 15 amid political turmoil in Timbuktu, Mali, according to a Swiss foreign ministry statement.

Before rebels captured Timbuktu on April 1, most Westerners had reportedly left due to fears of being kidnapped and passed on to Al-Qaeda cells. The terrorist group’s North African branch, Al-Qaeda in the Islamic Maghreb (AQIM), has been holding Westerners for millions of dollars in ransom payments from previous kidnappings in recent years.

Stockly, a Christian social worker in her 40s, had refused to leave Timbuktu, 705 kilometers (439 miles) northeast of the capital, when it fell to Tuareg rebels and Islamist extremists. She was in good health “considering the circumstances,” according to the Swiss foreign ministry statement.

The Tuareg are a nomadic Berber people and are the main indigenous inhabitants of interior Sahara in northern Africa.

Ansar Dine militants took custody of Stockly after a shootout with an unidentified private militia that had seized her and wanted to sell her to AQIM. Ansar Dine, which has imposed sharia (Islamic law) in areas under its control in the north, then handed Stockly to the Swiss government without demanding a ransom, according to Agence France-Presse. Stockly is reportedly safe in Burkina Faso.

Following an army coup on March 22 and political chaos that ensued, Tuareg separatists and Islamist rebels captured the country’s vast desert north, calling it the Republic of Azawad. The devastation amid the conflict has driven nearly 260,000 Malians living in the northern regions of Kidal, Gao and Timbuktu to seek safety in the south and surrounding countries, according to sources.

The International Criminal Court in the Hague, Netherlands in an online statement on Tuesday (April 24), said it may launch investigations into crimes against humanity and war crimes committed in Mali, including killings, abductions, rapes and conscription of children.

Among those who fled the north are hundreds of Christians, most of whom have found shelter in the capital, Bamako, in southern Mali. Local sources estimate about 300 Christians have fled to Bamako. Local churches are working together to care for them, but an area Christian told Compass by phone that the Christians had to leave their homes and properties and are “empty-handed.”

“There have been difficulties for Christians in the north,” said the source, a Malian. “All of them have left that region for the south. By the grace of God, there were no deaths. Everyone is safe. But it is difficult for those who left their homes. They have many needs. We don’t know if the situation will continue, but we are hoping for the re-establishment of peace.”

The Christian said he had not heard of any Christian being beheaded.

The source requested anonymity, pointing out that various extremist Islamic groups are active in the area and surrounding countries. He said that revealing his name would lead to harassment of churches with which he is affiliated, especially at a time when the government’s power is substantially weakened.

“We don’t want violence,” he said. “We want a spirit of well-being between all the people groups of Mali… [pray] that a government will be put in place and take things in their hands in good governance.”

On Wednesday (April 25), leaders appointed after the military junta agreed to stand down finally formed a transitional government that includes three army representatives, according to Al Jazeera. One of the new government’s greatest challenges will be to resolve the crisis in the north. (April 27 CDN) 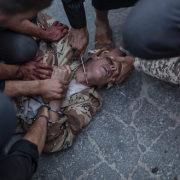 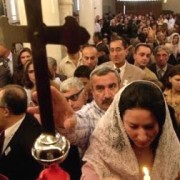 Muslims Slit A Christian Man’s Throat, Then Tell The Wife, ‘Jesus Didn’t Come to Save Him’

Iran. Group of political prisoners have been secretly hanged.

Syria. Ultimatum expired on Thursday, most of the city’s 10,000 Christians fled Qusair.