Articles
You are here: Home / Articles / Christian Persecution / China. House church was raided by police and other government agencie… 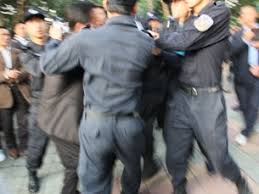 On December 31, 2013, approximately a dozen Christians met to pray in Zhang Keding’s rented home in Mengzhou City, Henan Province. About four o’clock in the afternoon, the house was raided by police and officials from the local public security bureau, religious department, and other government agencies. The officials questioned the Christians for more than an hour, although they did not write down or record the answers to their questions. The officials then took Zhang and two others to the local police station for further questioning and warned the rest not to meet again.

The next day, January 1, 2013, the officials returned to Zhang’s home. Using several migrant workers and ten vehicles, they hauled away an electronic organ, accordion, printer, TV, audio equipment, cell phones, beds and bedding, passports and other legal papers, clothing, etc. The officials recorded only a few of the items they seized, and refused to give Zhang a list of the seized items; they also failed to show a search warrant or inform Zhang why they were seizing these items. Instead of providing a legal rationale for their seizure of the Zhang’s property, the official simply informed the believers that their meeting was illegal.

A week later, on January 8, Zhang’s property still had not been returned. Zhang and other members of the church therefore initiated legal proceedings against the local public security forces, accusing them of robbery because they had taken his property by force in violation of the Chinese Constitution and applicable laws. Citing the Chinese Constitution and laws, and quoting Chinese leader Xi Jinping himself, Zhang and the other church members asked that all of the property taken in the raid be returned and the public security bureau forced to pay all the costs of their lawsuit.

As of the date of this writing, Zhang’s lawsuit remains pending.

Islamic Terror Attacks on Christians Since 9/11

Israel/Gaza. UN vote paved the way for creation of radical Islamist state to advance their goal of wiping Israel off the map.

Libya. hate and hostility for Christians.

Sweden. Two Iranian Christian converts are at risk of being deported to Iran.