Articles
You are here: Home / Articles / Christian Persecution / USA. Why do we never receive a promise of peace or an apology from any … 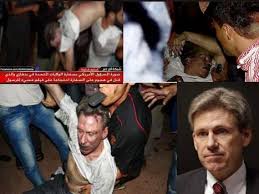 According to Sharia law, it is a capital crime for a Muslim to shoot another Muslim to protect a non-Muslim. To jihadists, Obama is just another disbeliever American President who should not be trusted. Not only did the Obama administration never receive even a promise of peace from the Muslim world; the murder of Ambassador Stevens and the three other heroic Americans never even occasioned an apology from any Muslim leader or cleric.

Americans need answers as to why the Obama administration had no response to the eight-hour terror attack on the US consulate in Benghazi and who was involved in the decision not to go to their aid despite their repeated requests for help. And why is the producer of the “Innocence of Muslims” video still in a California jail cell, allegedly for violating his parole, while none of the people who refused to rescue Ambassador Christopher Stevens and these immensely courageous former Navy SEALS has been even been named and charged with negligent homicide, or even reckless endangerment?

From the Muslim world’s viewpoint, the Obama administration’s behavior makes perfect sense: The Muslim world is used to, and expects, victims of terror not to act. It is an unforgivable violation of Sharia law for non-Muslims to fight back against jihadi assaults. As Muslims interpret such passivity, those who want to appease the Muslim world and its Sharia law are expected to freeze when faced with Islamic terror — freezing is the only acceptable response.

Ask Coptic Christians why they often leave Islamic terror unpunished, and why their Muslim attackers never go to jail? Why, if a non-Muslim responds to terror, he becomes an enemy of the Islamic State? Ask Israel why defending itself after terror attacks is never understood by the Muslim world? Muslims consider Jews as subhuman apes, pigs, and enemies of Allah, who do not have the right to defend themselves. Ask Middle Eastern non-Muslims why, even though the the Muslim media constantly slanders them, they must stay silent before the slander? Sharia law permits Muslims to slander and lie about their enemies. Ask victims of Islamic terror why they rarely, if ever, responded to it? Or why Christians in Egypt never burn mosques when Muslim attackers burn churches?

The answer to all of the above is simple: Under Sharia law, non-Muslims as well as non-Muslim countries, must never dare to respond to jihad [war in the name of Islam] in kind — not even to terrorism. If they do — if even one Muslim is killed in the process — they become permanent enemies of the Islamic State, worthy of more and more slander, terror and jihad.

To understand the current administration’s stance on Libya, it might help first to understand what seem to be Obama’s views on “The Muslim World.” U.S. President Barack Obama and his administration have for years been insisting that Islam has nothing to do with terrorism. The President apparently chooses not to see, hear or say anything uncomplimentary about Islamic Sharia and jihad. Members of the current administration even insisted that attacks, such as that of Maj. Nidal Hasan, who had “SOA” [Soldier of Allah”] on his business cards and who shouted “Allahu Akbar!” [“Allah is Greater!”], were “man-caused disasters or “workplace violence,” not Islamic terrorism. They instead blamed Islamic anger on previous American foreign policies, Israel, or even a YouTube video – a charge later discredited.

To members of the current administration, jihad seems to have nothing to do with terror; they dismiss statements by Muslims and the prophet Mohammed, such as: “”Paradise lies under the shade of swords” Sahih Bukhari V4B5N73. Instead, President Obama and Secretary of State Hillary Clinton promised to punish the producer of the video — in violation of the American right of free speech. 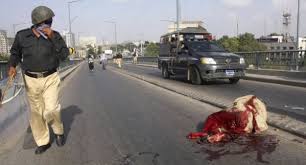 Obama, perhaps from his experience among Muslims during his childhood in Indonesia, seems to have believed that during his administration he could usher in a new era of peace with Islam. But as he appears to have narrowed the problem of Islamism down to only Al Qaeda and possibly the Salafists, he thought he could embrace as moderate other Islamic groups, such as the Muslim Brotherhood — a tortured revision which has to entail dismissing the long history of terror of the Muslim Brotherhood, which gave birth to Hamas, Al Qaeda and hundreds of other terror groups. In 2004, Sheikh Yusuf al Qaradawi, for example, made it a religious obligation [fatwa] to abduct and kill US citizens in Iraq; and Khalid Sheikh Mohammed, who masterminded the 9/11attacks, was raised in the Kuwaiti Muslim Brotherhood. The current leader of Egypt’s Muslim Brotherhood, Mohammad Badi’, has said, “Palestine will not be liberated by hopes and prayers, but rather by jihad and sacrifice.” Not to mention that the Brotherhood’s endlessly repeated motto closes with, “Jihad is our way. And dying in the way of Allah is our highest hope.” In Obama’s world, however, nothing is ever the fault of Islam.

If, however, placing American marines in US consulates in dangerous, terrorist-infested Islamic countries were going to spark a bloody confrontation between American security and Islamists, this uncooperative behavior would discredit Obama’s theory of Islam having nothing to do with terrorism, and contradict the State Department’s report of July 2012, which stated that, “Al Qaeda is on the run,” and reversals looked impossible.

If there were going to be confrontations with militant Muslim jihadists in Islamic countries, his whole fantasy of having brought in a new era of American/Islamic relations 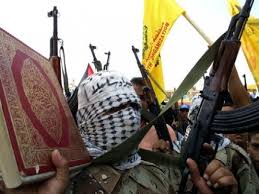 would fall apart and he would not be any different from his predecessors.

What seems not to have been taken into account in subcontracting security to local Libyans, Muslims, is that, according to Sharia law, it is a capital crime for a Muslim to shoot another Muslim to protect a non-Muslim. Anyone who did this would instantly be considered a violator of Sharia law, and an instant apostate marked for death. When the US State Department in Benghazi subcontracted consulate security to Libyan Muslims, there was of course precisely such a probability. The plan was therefore useless from the start: Muslim guards would be required to follow Sharia law to run away and leave the Americans to be killed rather than violate Sharia law and kill other Muslims to save these “unbelievers.”

The name of the group which took credit for the Benghazi terror, “Ansar Al Sharia,” means in Arabic, “Upholders of Sharia.” To them, one is either an enemy of Islam, or unresponsive to Islamic terror. Many cultures around the world possibly even consider their subservience and oppression as being peacemakers with the Muslim world, the “Religion of Peace” – meaning there will be peace over the world after everyone has converted to Islam.

Obama, since his inauguration, seems to have chosen to be this kind of a peacemaker and friend of Sharia, a trap that Muslims always count on: a fantasy that goes something like, I will make the Muslims love and accept me by respecting and accepting their Sharia law, because anything less might make me seem to them a hostile, anti-Islamic enemy, worthy of slander, attacks and more terror. It is possible that Obama did not want to aggravate a war on terror, which he refused to acknowledge existed, by concluding it in Pakistan and Afghanistan by withdrawing troops, and therefore being reluctant to send any military aid to Libya, which he thought he had just liberated. After all, he was probably counting on the end of Osama bin Laden and Muammar Qaddafi to secure his legacy as the peacemaker with the Muslim world. 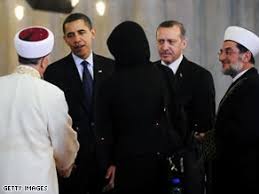 Obama was willing to pay a heavy price in the hope of receiving acceptance from Islamists who never have, and possibly never will, accord acceptance to any non-Muslim. The President may have thought that the best solution to win his upcoming election and appease a war-weary electorate was not to respond to Islamic terror, and cover up his failure to protect American lives by blaming his inaction as a justified response to a mob reaction to some video. Of course, such an evasion only invites an even larger attack later, which will cost even more in lives and treasure. The President may well have been hoping that at least this new assault would take place after he was safely re-elected. 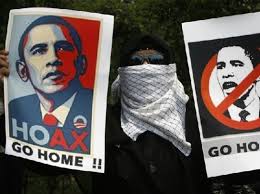 Obama’s calculations were wrong. We do not yet know what the American electorate will do, but as for the Muslims whom he is desperately trying to appease, evidently it did not even occur to them to put their 9/11 jihad on hold until after 11/6. To jihadists, Obama, whether appeasing them or not, is just another American unbeliever president who should not be trusted. With the terrorist attack in Benghazi, Islamists and jihadists made it clear that they could not care less about Obama, his appeasement, his apology and even his apparent affection for Islam.

Not only did Obama and his administration never receive even a promise of peace from the Muslim world; the murder of the American ambassador and three other heroic Americans never even received an apology from any Muslim leader or cleric.

(Gatestoneinstitute: Nonie Darwish is the author of “The Devil We Don’t Know,” and President of Former Muslims United.)

Kashmir. Residents are being warned to prepare for a possible nuclear war.

Ethiopia. After prison – Muslims had taken over his land and demolished his house. No sign of his children.