Articles
You are here: Home / Articles / Christian Persecution / The Islamization of the Middle East and then the entire world is the stated… 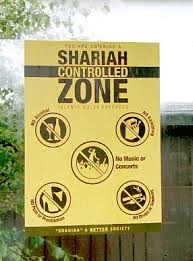 We cannot, and must not, stand for a religion that will limit our ability to speak, especially a religion that openly calls for the murder of people of other religions, and often even its own.

The Sydney police force announced a few weeks ago that, in anticipation of more hostile Islamic street protests similar to those that several weeks ago had turned violent, it intended to increase its numbers by several hundred. The original protest, sparked by the YouTube video that mocked the Islamic prophet Mohammed, featured people sporting placards that read, “Behead those who insult the prophet,” and ended with at least nine arrests.

Sydney, Australia? A place that prides itself on racial and religious tolerance and for being a land of broad multi-culturalism? Well, as the young Muslim, Mohammed Zuhbi from Liverpool Sydney told reporter Tom Tilley from Triple J, “We don’t want to apologize for our behaviour, or feel like we need to justify our existence because of this.”

Zuhbi then asked how else can you express yourself when you are seeing death on a global scale, besides being violent. He went on to claim it was a peaceful protest, but had escalated when the police “provoked” them with batons and pepper spray — just as the Americans had provoked them into violence with their unforgivable treatment of Muslims, including Israeli provocations.

Peaceful protests? Perhaps Zuhbi did not see the posters, often held up by young children, encouraging murder by beheading for the infidels who criticise Islam and inciting hatred for America. Perhaps Zuhbi did not see bleeding and unconscious police officers. Zuhbi, however, went on to say that protestors normally do not have a voice and were therefore forced to act, and that the protests were a manifestation of such anger and sadness towards their ill-treated brothers in Syria, and the treatment of Muslims in Afghanistan and Iraq.

The recent protests were not really about a film, or cartoons in French or Danish publications, or even about retribution on the anniversary of 9/11 the for the arrest — and subsequent release — of the man who was evidently responsible for murdering a US Ambassador on US soil, or the usual kind of extreme offence-taking. Although many religions contain distasteful verses, and although most people in most religions, including Islam, are undoubtedly good, hardworking souls who just want a decent life, these protests really seem to be about a religion which stands apart as the only faith that awards itself a warrant to kill anyone who criticizes it or even tries to leave it.

We have witnessed many sacrilegious events in recent times, such as painting of Jesus in urine, or the Virgin Mary amid dung. As author Sam Harris protested in September 2012, a line needs to be drawn and defended without apology: “We are free to burn the Quran or any other book, and to criticize Muhammad or any other human being.” We cannot, and must not, stand for a religion that will limit our ability to speak, especially a religion which openly calls for the murder of people of other religions – and often even its own — some of whom are referred to as “sons of pigs and monkeys,” or which itself permits the burning of the holy Bible, or, as in certain countries such as Saudi 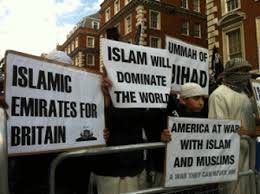 Arabia, does not even allow it on its shores.

The Imam of Sydney largest mosque, Sheikh Yahya Safi, spoke to his people at Friday prayers at that time, calling on members of the Islamic community not to respond to protests. According to Zuhbi, this was only out of fears for Muslim safety and police provocation. Another elder, Sheikh Riad Galil, declared that these aggressive protestors had been isolated for so long that “they cannot communicate with others in what we call normal ways.” Yet another Muslim spokesman, Shiraz Patel, then granted further clemency by explaining, “I think in any society there are always going be parts of the youth, the young communities that are going to feel a little bit alienated or marginalized.”

We infidels are left feeling frustrated, and with a niggling feeling that the Muslims of Australia remain — as they are permitted in both the Quran and the Hadith — absolutely unapologetic on these matters. All the while, our leaders and police spokespersons continually advertise the “peaceful nature” of the Islamic community, and their willingness to co-operate with the authorities.

It is disheartening to see how completely useless Christianity is in a struggle of this kind, and to realise that Christianity now is a religion not of peace but of pacifism and surrender. This seems to be our country’s position as well: pitiful submission to intimidation, as if they are saying, “Let’s just not upset them further; let’s just become acquiescent to their demands on us to comply with their Islamic laws, or else they will just go completely berserk.”

When the leader of Hezbollah stands up and announces that the video allegedly at the center of all of the most recent hysteria was in fact designed by US intelligence, it should come as no surprise that people in the Middle East believe that everything that spills out of America is sanctioned by its own government, just as it is in their countries. The question of course is: Can this deep-seated belief ever be changed?

If one looks back a few decades, Islam and its culture already have changed. Cities such as Beirut, Damascus, Cairo, Alexandria, Tehran and Baghdad were famous, open cities — cultured cosmopolitan places. Beirut was once called the Paris of the East.

The Islamization of the Middle East and then the entire world is the stated end game for many Islamists; as that condition is imagined to be the greatest gift and blessing from Allah, many are determined to realize their dream whatever the cost. If even just one percent of Muslims feel this way, that still counts as 15 million people. Those of us who choose to read, think and venture outside of our sheltered and often privileged boundaries are beginning to realize that the cost for the infidel will be great.

So what do we do about this? The answer probably lies in changing our foreign policy of complicity, partly by educating women in Islamic nations so they can have economic independence, and partly by educating ourselves more accurately about the objectives of radical Islam. Is Egyptian President Mohamed Morsi’s recent lunge for power just personal ambition for more money and power for himself or the Muslim Brotherhood he represents, or do the Brotherhood and he look on his newest decree as just the first step in a larger, more universal, power grab?

We should also be reminded how politically manufactured this Islamist rage often is – not the protestors currently camped out in Tahrir Square who lament they never intended to trade in a secular Pharaoh for an Islamist one – but Islamist protests, such as the Mohammed Cartoon riots, which are not the impulsive outbursts of people suddenly rising up, but fabricated, professional demonstrations, orchestrated by people with political agendas in search of a pretext — an industry of indignation, safeguarded by politicians and religious leaders for political purposes.

We also need to call the problem by its right name, which is not Islam vs. the West, but rather Islamic Leaders vs. Their People – wherein those in positions of authority are like puppet masters, manipulating their own countries, and using their own citizens as serfs to gain for themselves greater power and often wealth – all fuelled by the strong and unshakable belief in the supremacy of the faith of Islam.

In addition, we need to stand up and tell our governments that we will not tolerate religious extremism of any description. This applies especially to the Australian government, which recently was too cowardly to allow an entry visa to democratically elected Dutch M.P. Geert Wilders, even while granting visas to Muslim leaders such as Taji Mustafa from groups such as Hizb-ut-Tahrir.

Finally, and most importantly, we need to tell our government that we will not stand for being merely “tolerated” by an intolerant population right here in our own country.

Sadly, Geert Wilders was forced gracefully to retreat from his scheduled tour, following the apparently calculated stalling of his visa. But he is re-scheduled to tour Australia in February 2013.

Meanwhile the doors are opened wide for people such as Taji Mustafa whose religious and political directives come straight from bin Laden himself. Wilders is a brave and thoughtful man from whom our politicians could learn much, as he has already done the hard work for them. All that politicians, such as our craven immigration minister Chris Bowen, need do is listen to what he has to say, instead of making loud noises about anti-multiculturalism and racism.

In darker moments, one might well ask, what noises will be made following a nuclear Jihad?

Martin J. Day is a psychologist stationed on the Gold Coast, Australia. Included in his special interest studies are neuroscience, mental illness, psychopathy, and the worldwide history of politics and its coalescence with religion. He is also interested in indigenous affairs and the study of societies of all colors and how they are evolving in a rapidly changing modern world. (Gatestoneinstitut)

Sudan. Seasonal rains will exacerbate already dire conditions in refugee camps.
Chechnya. Christian Presence In Chechnya Has Been Largely Eliminated Or Expelled.
Egypt. three Christian brothers were shot dead.
Egypt. Who are the Salafists and what is their goal?
Syria. “Fearing for my life, I declared my support for President Assad.”
Iran. Foreign Ministry calls on OIC to work to criminalize criticism of Islam in the West.
Nigeria. Two christian students, aged 16 and 17 years shot dead by unknown Muslim gunmen
Egypt: Christians call for repeal of dhimmi law restricting church construction
0 comments