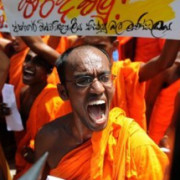 COLOMBO, Sri Lanka (BP) — Christians in Sri Lanka, off the southern coast of India, are facing an increase in persecution at the hands of Buddhist fundamentalists who believe the country is a historic Buddhist land that should not be shared with anyone else, a watch group reported.

Christianity is viewed in Sri Lanka as a product of Western colonialism that threatens Buddhists’ identity, the Washington-based International Christian Concern said, adding that the practice of Christian evangelism is seen as an obstruction to Buddhists’ vision for the country.

Open Doors USA, which also closely monitors the persecuted church, corroborated the account in a report June 4, saying Sri Lanka has seen 30 incidents of persecution against Christian churches since January, and “the perpetrators of such acts were not brought to justice.”

A contributor to CNN, in a June 4 opinion piece, wrote that it is time for U.S. pressure on Sri Lanka, which ended a 30-year civil war four years ago but still oppresses people groups.

The United Nations Human Rights Council has cited the continuation of “enforced disappearances, extrajudicial killings, torture, and violations of the rights to freedom of expression, association and peaceful assembly, as well as … discrimination on the basis of religion or belief,” the CNN writer stated.

In late May, a 30-year-old monk set himself on fire to protest the spread of Christianity in Sri Lanka, and his supporters said they would make his dying wish a reality, ICC reported May 29, indicating persecution against Christians there could yet escalate.

About 200 Sri Lankan Buddhists blocked traffic in the capital of Colombo to protest after authorities rejected a state funeral for the country’s first monk to set himself on fire as a form of protest, Agence France-Presse reported May 27.

ICC reported that 2012 and 2013 have seen a dramatic increase in Christian persecution in Sri Lanka, including Christians being attacked in more than 50 incidents in 2012 alone for practicing their faith. Reports of Christian pastors and their families being threatened and having their homes firebombed have almost become common, ICC said.

Catholic World News cited a bishop May 1 in Sri Lanka who said the cause of the uptick in persecution is the growth of what he calls the “Buddhist Taliban.”

Sri Lanka, with 21.5 million people, is 69 percent Buddhist, 8 percent Muslim, 7 percent Hindu and 7 percent Christian, and many of the Christians are Catholic, according to the Catholic World News report cited by ICC.

In March, a large mob attacked a pastor’s home while the family was away and began damaging the property, demanding an end to the church services in the home, ICC said May 5.

The same pastor had been accosted and threatened by a group of Buddhists telling him to close down the church late last year, the human rights organization said. The protesters returned the next day and attacked the building during a worship service, injuring the pastor.

Also in March, more than 10 churches faced persecution in the form of threats, disturbances, harassment or attacks, mostly from Buddhist monks but sometimes with the assistance of the police or a mob, ICC said.

Last summer, a 14-year-old boy, the only Christian in his class at school, reportedly was severely beaten and threatened with death if he did not stop spreading Christianity.

“What is troubling today is the increase in the severity and frequency of the attacks, raising concerns over the motivations behind them and the safety of Christians,” ICC said.

“Although Buddhism is the national religion, the government has expressed its desire to provide religious freedom to all. This is a claim that is severely undermined by the apathy of the police, the courts and the judicial system when it comes to cases filed by Christians against their persecutors.”

Open Doors cited an April press release by the National Christian Evangelical Alliance of Sri Lanka, which expressed deep concern over the “prevalence … of an organized campaign of hatred against adherents of non-majority faiths.”

“There are two alarming factors about the current situation,” the evangelical group wrote. “The first is that the violence seems to be organized and orchestrated by two organizations. Hence the violence has sustainability. Secondly, and most alarmingly, both the extremist violent organizations seemingly have patronage and support from authorities and hence the impunity with which they operate.”

The evangelicals did not identify the two organizations.

ICC believes the motivation for the use of violence by Sri Lankan Buddhists is rooted in politics and ethnic identity.

“Without an urgent initiative to protect its religious minorities, Sri Lanka runs the risk of empowering an unhealthy nationalistic sentiment that will only subvert its earnest efforts to birth a better nation out of the ashes of war,” ICC concluded.