Note: All but one of the photos (the one at the very bottom) in this post were provided by our Rescue Christians contact in Pakistan. 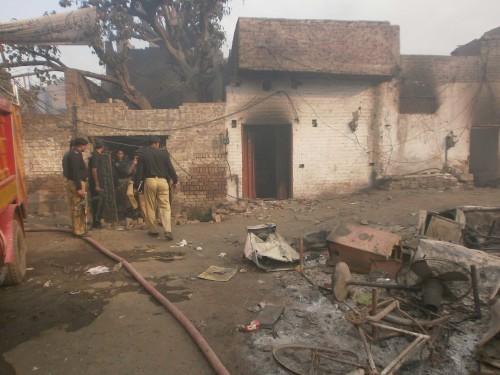 After Sawan Masih was arrested and charged with blasphemy in Pakistan, an angry Muslim mob – estimated to be about 3000 strong – descended on the Christian area of Joseph Colony (near LaHore) and burned down hundreds of buildings, the majority of which were Christian homes. According to reports, police stood down and allowed the rioting to take place as Masih was detained. 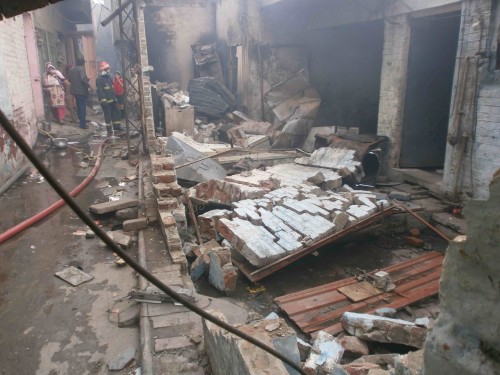 In the wake of the riots, our people on the ground there have provided safe haven for at least 11 Christian families and made an attempt to do the same for Masih before he was arrested. However, the group that Masih entrusted his protection to actually turned him over to police.

The area’s residents were also critical of the role of some Christian non-government organisations such as CLAAS, Sharing Life Ministry, Pakistan Christian Movement and Human Liberation Commission which, according to them, had only worked to worsen the situation.

“Joseph Francis of CLAAS, Sohail Johnson, Saleem Gabriel and Aslam Pervaiz Sahotra used the incident for their vested interests. Sawan had initially been taken in by Saleem Gabriel and Aslam Sahotra who later handed him over to Joseph Francis. People close to Gabriel and Francis told us that the latter had paid Rs 100,000 to them for Sawan’s custody. Francis then organised a photo session with the accused and around 2am on Saturday gave him in the custody of the Badami Bagh police,” a resident Raja Asif confided to Pakistan Today.

Rescue Christians and our contacts in Pakistan strongly condemn the actions of these groups; they are acts of betrayal in the interest of personal aggrandizement. 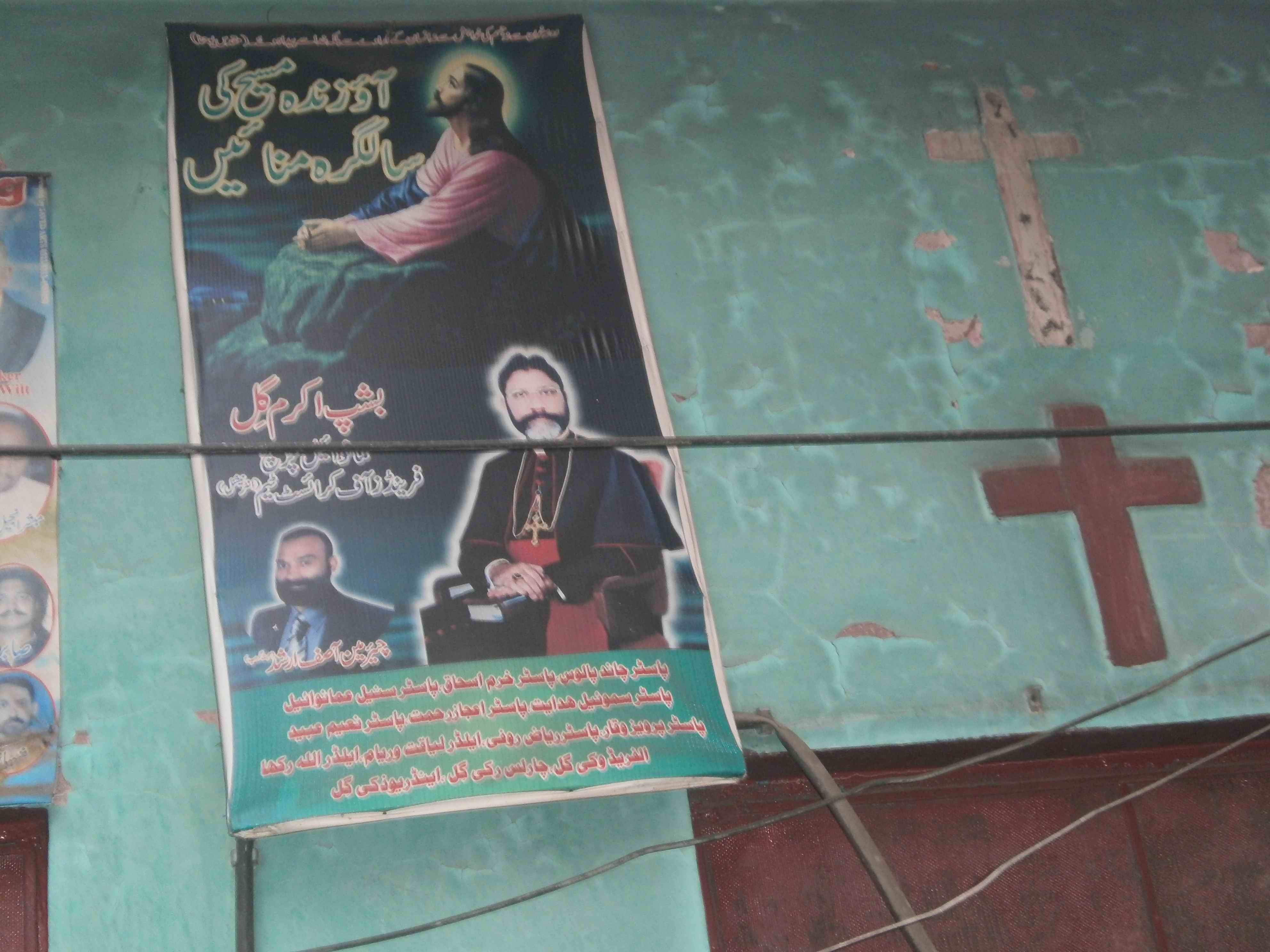 Is it good enough just to be informed? Consider being a partner in saving the lives of Christians in Muslim countries, click here for details.

Our contact on the ground was livid upon hearing this but it actually gets a bit worse relative to Francis’s actions and the mobs. The aforementioned resident said that Joseph Colony began getting ransacked as a result of Francis turning Masih over to police in secret:

He said that the violence could have been prevented if Francis and the others had conveyed to the Muslims that Sawan had been handed over to the police. “They however chose to keep mum, which resulted in the massive damage to our homes. Loss of lives and property is good business for such NGOs. Now when we have lost everything they have the nerve to come to our neighbourhood again. It’s not just the Muslim extremists, there are black sheep within our community too,” he said, adding that Sohail Johnson and others were carrying burnt Bibles in their hands which they had retrieved from the debris.

“They were showing it to the media people and giving inciting statements…It is appalling that our homes and belongings have been destroyed yet these NGOs are more concerned about burnt holy books and TV interviews,” he said, regretting that no Christian political leader had visited the locality since Friday evening to console them. “We are political orphans.” 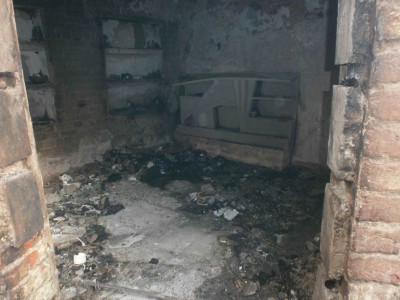 In short, many groups who identify themselves as entities that wish to save Christians are actually exploiting and profiteering. As if the challenges for Rescue Christians weren’t enough, our representatives are having to fight these jackals as well.

Injustice is not solely relegated to these profiteers or even the Muslim mobs; the police stood idly by and allowed homes to be burned while the perpetrators were not arrested. Yet, Sawan Masih was arrested and faces the death penalty for committing… wait for it… blasphemy of Islam. 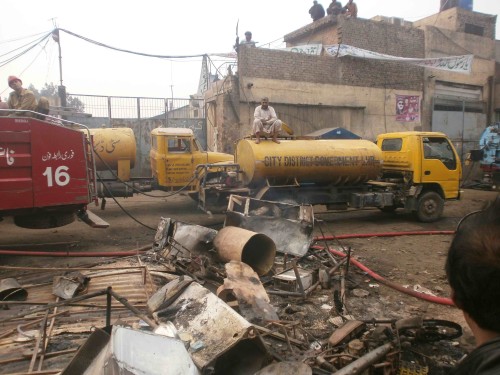 Via the Pakistan Today article:

The Lahore police just stood by on Saturday as violent mobsindiscriminately burned down at least 200 houses and 80 shops at a Christian inhabited locality in Punjab’s provincial capital after a Christian youth was accused of blasphemy the other day.

A little bit later in the article, it was reported that the Punjab Chief Minister – Shahbaz Sharif – held a press conference and praised police, which didn’t square with the account of a Christian pastor:

Shahbaz also appreciated the police personnel for evacuating the Christians the night before, which he said had saved several lives.

“Rather than stopping the mobs from burning down the houses, the police watched the entire incident as bystanders and the CM has the audacity to praise them for ‘saving Christians’. What can we say but lament the fact that we are a minority governed by an indifferent people,” said a local Christian pastor. 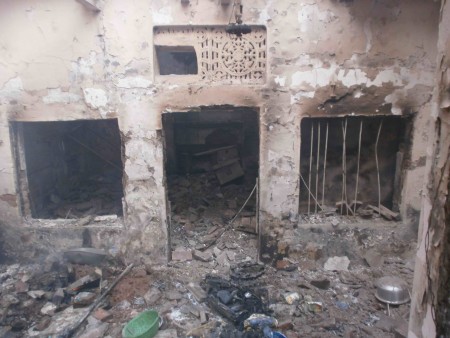 Even if one is twisted enough to believe that blasphemy of Islam should be a crime, there is no real evidence that Masih did so. The charge stemmed from an argument between Masih and two other men.

Masih says the three got into an argument while drinking and that the other two men threatened to publicly accuse him of blasphemy,according to Majid.

“The attack is yet another shameful incident against a vulnerable community and further confirmation of the slide toward extremism in society on the one hand and, on the other hand, the apathy and inaction that has become the norm among the police,” the Human Rights Commission of Pakistan said in a statement.

The group accused police of arresting Christians in the incident “while those who went on a rampage and can easily be identified from television footage have gone scot-free.”

As you can see, Christians in Pakistan aren’t just in danger from persecution by Muslim mobs and ridiculous blasphemy laws that undermine basic human rights but they are having to carefully scrutinize anyone who pledges to help them and they cannot trust the police to protect them. 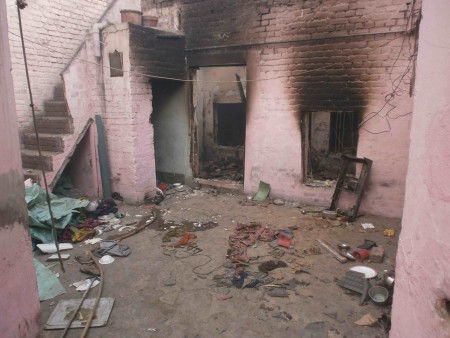 While our group has managed to provide safety to several families in the wake of this atrocity, we still need to do more and would very much appreciate your contributions. Due to the sheer scale of devastation, significant resources are necessary and we are in desperate need of reaching our goal of $11,000 to bring aid these victims.

We are in frequent contact with our person in Pakistan and we will all make sure your donations are maximized for the purpose of rescuing Christians. 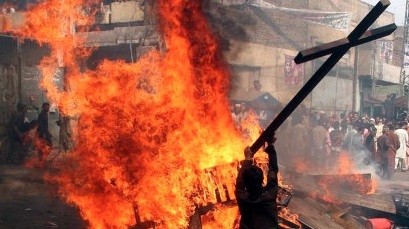 Kenya. Religious violence is on the rise following a series of explosions.
Pakistan. Calls To Put Pakistan On Genocide Watch.
Iranian Authorities Once Again Raided A House Church And Arrested Christians.
Egypt. President Mohamed Morsi has been forced to declare a state of emergency.
Pakistan. Advocacy group urged president to release Christians accused of defaming Islam.
Indonesia. Government ordered to shut down the embattled HKBP Church in Bekasi.
Saudi Arabia. Three dozen imprisoned Christian Ethiopians have been freed.
Nepal. caller threatened to bomb church if they did not give money.
5 comments

Even if one is twisted enough to believe that blasphemy of Islam should be a crime, there is no real evidence that Masih did so. The charge stemmed from an argument between Masih and two other men.