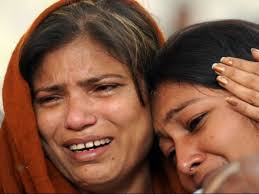 Mr. Patras is working as stitch operator in a Factory, on Eid-Ul-Muladul Nabi he was on holiday and he was at home with his family members. Some Muslims men, who are drug sellers, passing in front of his door at near about 5:30 PM evening . They opened fire at his door and when he came out from his house to see what happened. He was also fired at by them and he ran away from the site for saving his life.

Mr. Patras told this incident to other Christians. Some Christians thought that they should tell the other respectable Muslims and their parents so that they would stop them to doing such dangerous activities. Mr. Patras along with some other Christians went to some respectable Muslims, those Muslims again opened fire at all of them and made them forced to stand in a row. They also threatened that if any one of you would submit any application against them in police station, they will kill him. They also threatened by saying “you are Christians insects and have no power to do anything against us”, and “you are slaves and trivial and tiny before us” and “we will burn your houses and church” told Mr. Patras.

Some other Christians told that they were under threats and pressure of such drug sellers. They also told that they always remained under pressure and fear that how their honor and belonging would be saved from such dangerous persons.

“There were already many criminal cases against them and they did not care about such cases and what will be benefit if I will submit an application in Police station against them” told Mr. Patras. He also added that he was worried about his new generation. Some Christians told that such incidences often happened with them and they had no way how to avoid from such things. They also told that they were not safe in Pakistan and their honors and belongings were also not safe.

Sardar Mushtaq Gill advocate and Chief of LEAD strongly condemns such persons and their dangerous activities which be the cause of creation of feeling of insecurity in Pakistani Christians and demands from Government that it should take some strong steps to eliminate such elements from society.

Egyptian Islamic Association: “Eating tomatoes is forbidden because they are Christian”.

Nigeria. Seven people brutally killed when gunmen set fire to a home in a Christian village

Obama’s Brother Works With Man Who Attacked US Embassy

Iran. Over 300 Christians arrested and detained throughout the country since June 2010.