Articles
You are here: Home / Articles / Christian Persecution / Nigeria. US government has link Boko Haram with the powerful Al Qaeda in… 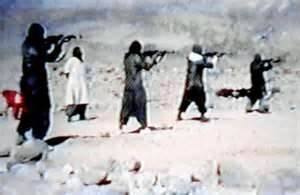 The spate of incessant attacks and ruthless bombing by the Islamic sect, Boko Haram in the northern Nigeria is on the increase everyday despite efforts by the government to bring the menace to an end.

The Christian community in Chibok, Maiduguri, northeastern Nigeria, on Sunday watched helplessly as members of the Islamic fundamentalist group Boko Haram, chanting Allahu-Akbar, stormed the community and slit the throat of 10 Christians living there.

The gruesome murder of the christian faithfuls being slaughtered like ‘Ileya’ ram does not mean that the sects lacked sophisticated weapons to quickly dispatched their targets to the great beyond, they deliberately chose the knife to slaughter their victims to demonstrate the murderous barbarism in them. They visited on their victims a slow, agonising death, the type meted to animals in captivity.

To this end,It is crystal clear to all that the government lacks the means to stop these attacks. Despite several arrests and killings of top commanders and members of the dreaded sect, the group continues to unleash mayhem on Nigerians in the North and Abuja.

Nigerians should not offer themselves as cheap targets of these evil killers, they should protect themselves by fighting back if attacked. It is when they do this that members of the sect will think twice before launching an attack against them. If the members of Boko Haram knew that those they were going to attack will fight back, they will think twice before launching an attack.

Meanwhile, the United State of America government has link the ruthless Islamic sect with the powerful Al Qaeda in Mali.

An American military commander in Africa, General Carter F.Ham, has detailed how Nigeria’s Boko Haram militants have been receiving training in bomb making and funds from Al-Qaeda from their bastion in Northern Mali.

It is a report that should get Nigeria’s military and political authorities worried, especially as Nigeria gets ready to send a force of 3,300 soldiers to join the West African intervention force to the balkanised state of Mali.

According to a report by New York Times, Al Qaeda’s affiliate in North Africa is operating terrorist training camps in northern Mali and providing arms, explosives and financing to a militant Islamist organization in northern Nigeria, the top American military commander in Africa said on Monday.

The affiliate, in the Islamic Maghreb, has used the momentum gained since seizing control of the northern part of the impoverished country in March to increase recruiting across sub-Saharan Africa, the Middle East and Europe, said the commander, Gen. Carter F. Ham.

General Ham’s assessment is the most detailed and sobering American military analysis so far of the consequences of the Qaeda affiliate and associated extremist groups seizing the northern part of Mali to use as a haven.

“As each day goes by, Al Qaeda and other organizations are strengthening their hold in northern Mali,” General Ham said in remarks at the Homeland Security Policy Institute at George Washington University. “There is a compelling need for the international community, led by Africans, to address that.”

In addition to the risks inside Mali, General Ham also said that members of Boko Haram, an extremist group in northern Nigeria, had traveled to training camps in northern Mali and have most likely received financing and explosives from the Qaeda franchise. “We have seen clear indications of collaboration among the organizations,” he said.

Radical Islamists have turned northern Mali into an enclave for Qaeda militants and for the imposition of harsh Shariah law, which has been used to terrorize the population, particularly women, with amputations, stonings, whippings and other abuses.

The Qaeda North Africa affiliate is now considered one of the best armed and wealthiest of the Qaeda franchises across the world, largely because of millions of dollars gained in kidnapping ransoms, drug proceeds and illicit trafficking in fuel and tobacco, General Ham said.

Last week, Ban Ki-moon, the United Nations secretary general, recommended that the Security Council endorse a plan by the African Union and the Economic Community of West African States to deploy a security force at the request of the Mali government to reclaim the north from the extremists. But the action did not offer financial support from the United Nations.

“Northern Mali is at risk of becoming a permanent haven for terrorists and organized criminal networks where people are subjected to a very strict interpretation of Shariah law and human rights are abused on a systematic basis,” Mr. Ban said in his report.

While a detailed military plan has yet to be drafted, the idea has been for about 3,300 troops from Nigeria and other African countries to help Mali’s military mount a campaign against the militants. France, the United States and other countries would help with training, intelligence and logistics.

General Ham acknowledged that Qaeda fighters would probably solidify their gains in northern Mali — an area the size of France — in the months that it would take to train and equip an African force to help Mali’s fractured military oust the militants from the north.

General Ham said that pursuing a diplomatic solution should be the first avenue for resolving the conflict. Malian diplomats have recently met with some ethnic Tuareg rebels in neighboring Burkina Faso in an attempt to resolve some long-standing complaints by the Tuareg people and isolate the Arab foreign fighters from the Qaeda franchise.

General Ham, a former Iraq war commander who oversaw the initial American-led air campaign against Libya last year, identified hurdles that an African force would face in evicting the extremists. Most of the African militaries likely to participate in such an operation have largely been trained and equipped for peacekeeping missions, not offensive operations, he said.

The region’s desert terrain, vast distances and the likelihood of an extended conflict also pose significant challenges to an African force, as well as to any Western militaries playing supporting roles, he said.

Mr. Ban identified even more basic issues to address before an African-led force would be ready to deploy. “Fundamental questions on how the force would be led, sustained, trained, equipped and financed remain unanswered,” he said in his 39-page report to the Security Council last Wednesday.

Islamists seized control of the long-unstable north after a coup d’état in the Malian capital of Bamako last March. The Malian Army collapsed after the coup, fleeing the main cities of the north in the wake of the rebel advance, and power in Bamako has since been uneasily shared by weak civilian leaders and the military, which has been accused of serious human rights abuses.

The fall of Col. Muammar el-Qaddafi in Libya prompted Tuareg fighters from northern Mali, who had been fighting alongside Colonel Qaddafi’s forces, to return home with weapons from Libyan arsenals. They joined with Qaeda-affiliated Islamist militants who had moved to the lightly policed region from Algeria, and the two groups easily drove out the weakened Malian army in late March and early April. The Islamists then turned on the Tuaregs, routing them and consolidating control in the region in May and June.

Iran. Situation still unclear six months after arrest of 5 Christians. There only crime is their faith.

Middle East. Muslim Persecution Of Christians Is Increasing At An Alarming Rate

Sweden/Iran. Christian woman At Risk of Deportation to Iran.

Christians Are The Most Persecuted People In The World

Pakistan. Seven aid workers have been killed in northwestern Pakistan.

Muslims Break Into Family’s Home, And Murder Mother and Children

Egypt. “For Christians, The Revolution Was A Bad Event”