Articles
You are here: Home / Articles / Christian Persecution / Nigeria. Boko Haram attack came at a time when it seemed that the level…

More than nine months after Boko Haram, an Islamist terror organization in Nigeria, demanded that Christians immediately vacate the northern states of that African nation, Christians are continuing to be murdered while the government struggles to wage a campaign against the destabilizing guerrilla forces. 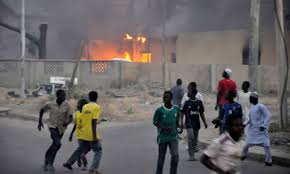 The most recent attack perpetrated by members of Boko Haram took place in the northern city of Bauchi, when a car bomb was detonated by its driver at the gates of St. John’s Church. For years, Boko Haram — a name which means “Western education is sinful” in the Hausa language — has waged a campaign of terror against the people of Nigeria in an effort to impose sharia law and to divide the nation between Islamic and Christian territories. As reported previously for The New American, the leadership of Boko Haram demanded in January of this year that all Christians immediately flee the northern states of Nigeria, which the Islamist organization believes should be inhabited only by Muslims. The demand came in the aftermath of Christmas Day bombings which killed dozens of people and left almost 100 wounded.

The September 23 attack on St. John’s Catholic Church was initially reported to have killed two people and wounded nearly 50 others; these figures were later adjusted to report four fatalities — not including the terrorist — with 48 wounded. The attack was the second such anti-Christian assault in Bauchi in one week.

According to the BBC, the attack came in the aftermath of government security forces killing Boko Haram spokesman Abu Qaqa in a gun battle in the state of Kano in northern Nigeria. Other reports mention that the spiritual leader of Boko Haram, Isah Abuja, was also killed in the same battle.

The deaths of Abuja and Qaqa could prove a significant development in the efforts of the Nigerian government to defeat the Islamist insurrection. According to The Sun, an additional 158 suspects have been arrested in the past few days in possession of “sophisticated weapons”:

A special joint task force of security operatives, comprising men of the State Security Services (SSS) the Police and the Armed Forces, codenamed, “Operation Restore Sanity” on Monday, unraveled the mystery of Boko Haram operations in Mubi, Adamawa State, as no fewer than 158 persons have been arrested with sophisticated weapons. Security agents also discovered a factory alleged to be manufacturing ammunition, guns and Improvised Explosive Devices (IED), daggers, bows and arrows, AK 47 rifles, gun smokers and dane guns and [these] were recovered by Operation Restore Sanity.

The factory, located at the Shagari Low Cost Housing Estate, in Yelwa Ward, Mubi was discovered, while the security operatives embarked on house-to-house search for culprits and suspects of the Boko Haram Islamist sect, following a dusk-to-dawn curfew imposed on Mubi Metropolis and its environs.

Undeniably, the arrest of so many individuals, and the discovery of a Boko Haram weapons factory is significant; what is unknown at present is what effect these events will have on the capacity of the Islamist organization to continue their campaign of terror. According to press reports, a common complaint in Nigeria is that the nation’s porous borders allow terrorists to smuggle weapons into the country with relative ease.

According to a story for the website AllAfrica, the attack on St. John’s Church came at approximately 9 a.m. on Sunday, September 23, as worshippers were leaving the church following the conclusion of the first service:

Sunday’s attack came nearly a week after nine persons were killed and seven others received various degrees of injuries from gunshots in the area.

Also, last week, the former Controller-General of Prisons, Alhaji Ibrahim Jarma, who was shot by some unidentified gunmen in Bauchi, died from gunshot injuries.

HURIWA also “called on President Goodluck Jonathan to declare a state of emergency in Borno, Yobe, Bauchi, Adamawa and Kano States for six months to enable the government to combat the rising spate of bomb attacks in the states.” After nearly 1400 deaths caused by Boko Haram in the past two years, HURIWA’s appeal to Nigeria’s president is hardly an isolated event.

The attack on St. John’s Church came at a time when it had seemed that the level of violence was decreasing. The Christian Association of Nigeria (CAN) issued a statement denouncing the violence, and calling on the state to take the measures necessary to defend citizens from such wanton violence. As The Sun reported:

“CAN notes that the re-launching of violence against Christians and their churches at a time when many Nigerians felt such insurgency had ebbed is instructive,” the statement made available to Daily Sun in Abuja by the Special Assistant to the CAN President on Media, Mr. Kenny Ashaka, said. The statement further read: “Coming on the heels of last week’s attack in Bauchi where some gunmen killed nine Christians and injured five, CAN condemns these deadly attacks. “We blame these attacks targeted at Christians in Bauchi, on the shadowy aloofness of the state government which has failed to take precautionary measures and complement the efforts of Christians in the state.”

“As it is, the state government seems to be unfazed by the calamities happening to Christians. It is sad that after several attacks on Christians in the state, we are still unable to put our fingers on the government’s ability to secure the lives, property of Christians and their churches. While CAN believes that Christians and well-meaning Muslims should continue to work together for the attainment of peace in the land, it is convinced that Muslim leaders in the north can end this orgy of violence and blood-letting by fishing out elements in their midst whose intention is to give their religion a bad name.” (thenewamerican)

Priest In Syria Beheaded On Tape

Jordan. Leaders are making a hero out of a Jordanian soldier who murdered 7 Israeli school girls.

Egypt. 100,000 Christians have left since the Muslim Brotherhood came to power.
0 comments