You are here: Home / Articles / muslims

58 Christian youths were attacked and slaughtered in Nigeria by Muslims, and numerous of them were literally burned to ashes.

I wrote about this story a number of days ago, in which I wrote that the estimated body count was 40, but now this is the latest number.

Some of the students’ bodies were burned to ashes

One student and witness recounted the horrifying and disturbing event:

I heard the cries of some people outside the school even before they [the militants] invaded the school …From where I was hiding I could hear other students crying at the top of their voices. I saw fire on the roofs of the hostels and other buildings in the school. But God saved my life. After they killed the students and burnt the structures, they fled.

So where are all of the sodomite and sycophantical homosexual sympathizers? Why aren’t they marching to Nigeria with their cameras, their pompous and outwardly righteous and objective dispositions and proud stances and tones of voice, with their use of the words “justice” and “liberty”? Oh, that is right, they are too busy harassing Christians in Russia and Uganda. Why come to Nigeria because Christians are being killed? Because the left wing media not only does not care about dead Christians, they take pleasure in it.

After Muslim fundamentalists invaded the ancient Christian city of Saidnaya, the Muslim terrorist gang, Jabhat al-Nusra, made this declaration to all Christians:

Over the two years we have been fighting, you supported the tyrant of Damascus and his thugs. You were uninvolved, and we protected you. Now, you have turned your churches and sanctities into military barracks for that tyrant, and God forbids that we accept this. …God willing, the unsheathed swords of Islam will be raised on your necks in your own houses. God bear witness to what we say. …We tear apart the tyrant and apostasy with a great determination and a will that knows no defeat. We will color the dawn with our blood. The night of polytheism and atheism will be long gone.

By “polytheism,” they don’t mean paganism, but belief in the Holy Trinity, which is the belief that Islam inherently and assiduously desires to destroy. The war between Islam and Christianity is not a secular war, it is a theological one, between those who reject the Trinity and those who worship the Trinity. Islam, in its very beginnings, declared war on Christianity; therefore, this is a war for mainly Christians, and not something that secularism can resolve.

When they say that the Christians made their churches into military barracks, they are referring to the work of the Christian militants, The Lions of the Cherubim, who are working with Syrian soldiers in fighting off the jihadists in order to protect their beautiful and ancient church, House of the Cherubim.

We have written extensively on this Christian militia, in the only English report on this group of fighters, which can be read here.

The Christian fighters are withstanding the Islamic hordes, and efficiently vanquishing them in battle.

But many Christians are still without defense, and need our help.

PLEASE DONATE TO SAVE CHRISTIAN LIVES IN SYRIA.

A nun in Germany has recently done a presentation in a conference of an independent investigation she conducted of the treatment of Christians in Syria under the hands of Muslim fundamentalists. She revealed that Muslims are butchering Christians, draining their blood in bottles, and selling each bottle for $100,000 to Muslims in Saudi Arabia who take it to wash their hands in Christian blood, with the belief that it atones for their sins.

Here is the video of the presentation, showing what evils the Christians are suffering:

Last year a mob of Muslims surrounded a church in Indonesia, throwing rocks and frothing from their poisonous lips were their declarations of blasphemy. They hung up signs with demonic statements such as, “Jesus is a dog” and “Kill the Christians.” They threw rocks, dirt, and even bags of urine at the church and the Christians.

This is just scratching the service as to the depth of depravity and vileness in which the heresy of Islam plunges a man’s soul. And all of this deplorable violence took place as the police stood by and watched.

The liberty to have actually just having a church in Indonesia is grueling and unendurable to say the least. One church had to pay more than a million U.S. dollars to acquire a permit, and the permit is suppose to be free.

In the year 2012, International Christian Concern found that at least 50 churches were forced to close down in Indonesia.

And churches continue to close down in Indonesia, this is why we must help our brethren. Donate now to save Christian lives.

And the demons who fell from Heaven are ever so more taking the souls of the Muslims. Just look at this photo from a recent Islamic rally in Egypt — you can just see the demonic possession in this man’s eyes: 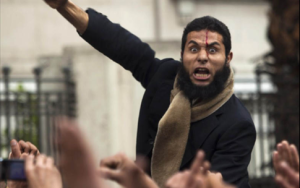 DONATE NOW TO SAVE CHRISTIAN LIVES

Muslim men, who are members of Boko Haram, have murdered countless Christians, and have recently gone so far as to disembowel a two year old boy named Miracle.

The heretics broke into a Christian home and made a great slaughter. The father of the boy had this to say:

I found out that Miracle Ishaya [2 years old, killed in the attack] had his intestines spilled on his bed as he was shot in his stomach … I was also told by relatives that the Muslim gunmen who attacked our home were eight, and that they wore military camouflage and bullet- proof vests.

This is horrendous, and the only ones who are capable of truly making a difference is you, the reader. So please make a donation, AND SAVE CHRISTIAN LIVES NOW.

A horrific massacre of unfathomable cruelty and grisly violence has just taken place by fundamentalist Muslims in the Syrian village of Adra in which innocent people were butchered and children thrown down windows. One survivor recounted:

What is happening in Adra is unthinkable … Children are being slaughtered and thrown out of the windows. But no one is doing anything. The crisis in Syria continues in an environment where there is no international law, including those relating to the paramilitary operations.

Nizar Skif, chairman of the Union of Lawyers in Syria, spoke of reports of “sadism,” and of people being “thrown into the furnaces” and “houses burned with people inside.”

Russia’s Foreign Minister, Sergey Lavrov, while being disturbed by the violence executed in Adra,slammed Western powers for attempting to make ties with the Islamic Front, the jihadist group who committed these crimes:

The Islamic Front has proclaimed quite radical goals, although our western partners have been trying to establish ties with them and describe the front as an “acceptable power”, which possesses influence “on the ground,” …However, there’s some evidence which we consider reliable and which shows that when the front was being created, a possibility of Al-Nusra joining in was discussed. That did not happen only to save the front’s reputation, as Al-Nusra has been on terrorist organizations’ lists in the US and Europe.”

American mediators of the Geneva-2 peace talks on Syria, scheduled for January 22, have actually been holding meetings with the front’s representatives.

Muslims are butchering people, and America is not only indifferent, but is trying to forge alliances with them. How are we as a nation to help the persecuted Christians? We cannot rely on our government, thats for sure, but we, as free individuals, can do something now. Here is a chance where you, the reader, can save the lives of your fellow Christians. Donate now and save Christian lives.

One person said he escaped Adra “under a storm of bullets”, and he described how the murderers came to establish sharia courts and kill government employees:

They had lists of government employees on them … This means they had planned for it beforehand and knew who works in the governmental agencies. They went to the addresses they had on their list, forced the people out and subjected them to the so-called “Sharia trials.” I think that’s what they call it. They sentenced them to death by beheading.

A woman who also escaped the sadistic ambuscade “http://rt.com/news/adra-syria-massacre-witnesses-355/” target=”_blank”>recalled how she witnessed the decapitations of youths as old as twenty:

The jihadists entered a bakery and slaughtered everybody inside, as Kinda Shimat, Syria’s Social Affairs Minister, recounted:

Civilians told us that the workers of an Adra bakery were all executed and burned during the first hours of the attack. Whole families were massacred. We do not have an exact estimation of the number because we are unable to get into the town, but the number is high

They went into the police station and killed all of the civilians, and then butchered everyone in a hospital, as one witness said:

They killed everyone at the Adra Ummalia police station … And they killed everyone at the Adra Ummalia hospital where my sister works. She stayed alive only because she didn’t show up for work that day. There are about 200 people at the police station. They are civilians. The militants are hiding among them, using them as a shield to prevent the Army from bombing the police.

This is what the Muslims want to do the Christians in America and the rest of the Western world. This is why we, as Christians, must combat tyranny and evil, and become militant. Get our new 2-disk DVD set which has almost 5 hours on the subject of Christian militancy and fighting.

Here are some photos taken of the violence: 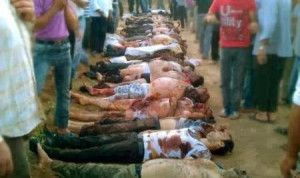 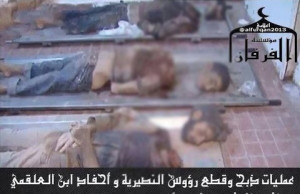 Also, here is a video in which you will see what brutalities these monsters did:

AFTER WATCHING THIS, DONATE TODAY AND SAVE CHRISTIAN LIVES

Here is a video of Brooke Goldstein speaking out on the horrific persecution in Pakistan, Egypt, and the rest of the Muslim world, and on how while Obama refuses to speak against Islamic persecutions on Christians, he is supporting the Muslim cause. Please click here to watch

Donate now and save Christian lives.