Articles
You are here: Home / Articles / Christian Persecution / Iran. Interview with one Iranian church leaders in London, outlined the…

Reports indicate that the Ministry of Intelligence has ordered leaders of the central AOG church in Tehran to provide them with a list of the members of the church including their National identity numbers and other personal details.

In an interview with Radio Farda, Mansour Borji, one of the Iranian church leaders in London, outlined the latest restrictions imposed on Farsi-speaking churches by the Ministry of Intelligence for this news service.

Mansour Borji: This has been a demand of the Ministry of Intelligence for years. The security authorities have severely pressured church leaders to cause them to submit a complete list of their church members, their national identification numbers, their birth certificate numbers as well as other details.

It is mentioned in the published news that the leaders of the church have asked the church members to submit their personal information voluntarily. Can you describe this?

However, after church leaders made this demand in the service on May 6, they again told the congregation that this is not something voluntary; if you are a member of the church, you are obliged to submit your information. Certainly, this is also a result of additional pressures on the church leaders by the Ministry of Intelligence.

Do you mean that it is not voluntary anymore and that all church members must give their information to their church leaders?

After this Sunday it is no longer voluntary. Church members are asked to do this.

What are the consequences of such a list being in the hands of the Ministry of Intelligence?

Firstly, this enables them (the Ministry of Intelligence) to know, who are the members of the church at the moment and go for them one by one.

In addition, this restricts the church from accepting new members. If the current members leave the church due to pressures and new members are not able to join the church, they can then choke the church in its current condition by restricting it.

What was the response of the church leaders to this demand?

The church members are so worried. This list of information creates the possibility that church members, especially those from non-Christian backgrounds, to be summoned and subjected to further harassment and interrogation.

This has caused a dilemma for the church leaders and they don’t know what to do. They know that if they submit the requested list, probably the members will be summoned to the Ministry of intelligence beginning the next day.

We know that [because of their tendency towards Christianity] many, who had been university students, were forced to quit studying. There were people working at offices and universities for more than twenty years, but were fired after their employers found out that they go to church and are Christians.

The Ministry of Intelligence had made this demand earlier but the leaders of the AOG church refused to implement it at that time. So, why have they agreed with it this time?

The leaders refused to accept the demand at that time, but paid a high price for it. A number of the church leaders were killed / martyred at that time because they denied these illegal and inhuman demands. However one’s patience also has a limit. When there is constant pressure on the church and Christians, the leaders have to think and do something for those in the church.

Could you please explain more about those leaders of the AOG church who you mentioned were killed?

You said these murders, had signs of the chain murders. What do you mean?

When the corpses of these dear ones were found, they had been stabbed with a knife more than twenty times. Some dissidents and critics of the regime, including Darioush Forouhar and his wife and others, were also killed in the same way as the pastors.

Do you have a list of those church members killed since the beginning of the Islamic revolution in Iran?

About 10 church leaders and pastors were killed. Three of the ten were not pastors but were church leaders, especially in house churches.

Do you know how many members the AOG church has in Iran?

No, I don’t have a precise number of the church members. However, the AOG church is the church with the most members in Iran.

What about the number of the Christian converts in Iran?

No, I don’t think there is a precise number. However, there are estimations and from evidence like the number of those being continually arrested and since this issue has received this much attention from the Iranian authorities and comments of senior authorities on this issue, you can tell that the number of the Christian converts is significant and has caused some concerns among Islamic scholars in Qom. Also, the Islamic scholars have warned against the growth of house churches in different cities including Islamic cities of Mashhad and Qom, which implies a large number of house churches in Iran. (Mohabat News)

The interview in Farsi: 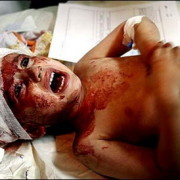 Gaza. Today in Gaza, tomorrow in Bethlehem. Palestinian Christians being kidnapped & forced to convert to Islam.

Britain. Authorities reject plan to build mega-mosque – leading activist: ‘You watch how we get angry’

Muslims Take Christian Children And Split Their Heads In Two

Pakistan. Christian girls continue to be kidnapped, abducted and forcibly converted to Islam.