You are here: Home / Articles / iran

Muslims broke into a family home and murdered a mother and her sons, and then afterwards, beheaded their corpses. They committed the murder because the father was a member of the Sunni political movement, Sahwa, which was calling on America to turn against Al-Qaeda.

As a journalist writing for The Economist, tells us:

The fighters also single out fellow Sunnis who are remnants of the Sahwa (“Awakening”) movement led by tribal leaders who were persuaded by the Americans to turn on al-Qaeda in 2007 and who are now being picked off. Gunmen recently attacked a Sahwa leader’s home near Samarra, north of Baghdad, killing his wife and sons, then beheading them.

The slaughter of human beings in this gruesome manner is an indication as to how important our cause against Islam is. If the violence between Muslims is at this level of brutality, imagine how vicious it is against Christians. We have partnered with Sister Hatune Dogan, who assists the persecuted in Iraq, to help us save Iraqi Christians. PLEASE DONATE TO SAVE CHRISTIAN LIVES IN IRAQ.

Watch this heart wrenching video of a father and daughter giving their testimony of how Rescue Christians delivered them from Islamic violence and brought to another country where they are now safe.

We rescued them, and by we, I mean all of us, who donated to our rescue team. Without you, these saints would not have been delivered from the tormenting persecution they would have suffered. May God’s blessing shine upon all of you.

After watching this, please understand that there are countless others of these oppressed saints that need to be rescued.

PLEASE DONATE TO SAVE CHRISTIAN LIVES IN PAKISTAN

By Theodore Shoebat Here is a video showing what evil the Muslims are doing to Christians in Nigeria, even going so far as to seize Christian children and cut their heads into two pieces.

After watching this, PLEASE DONATE AND SAVE CHRISTIAN LIVES

In an interview with Xinhua, Gregory III Laham, Patriarch of the Church of Antioch and all East, saidthat the violence in Syria has displaced 450,000 Christian Syrians and has butchered more than a thousand of these blessed saints.

Everyone, these are the signs of a greater holocaust, the greatest in human history, as Keith Davies calls it.

This is why the time to act is now. It is all up to you, and your will power. You are in the position to now save a life. Donate now and save Christian lives.

Syria’s armed rebels just recently fired numerous mortar shells on a church in Syria’s Southern province of Daraa, slaughtering 12 people and injuring a great many others. 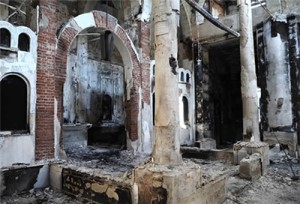 The Church, attacked by Muslims

DONATE NOW AND SAVE CHRISTIAN LIVES, THIS IS YOUR OPPORTUNITY TO BE A HERO FOR SOMEBODY.

In just one month Pakistan has had three cases of so-called blasphemy. The Third is the case of Tariq Yousaf and Arif Yousaf who were both arrested in the village Thatha Faqir Ullah.

When the police arrested Arif, his brother Tariq escaped, but he would not be in a state of liberation for long.

Tariq worked part time making firecrackers, and one day, a Muslim named Khurram Shahzed bought some from him, and then complained that the “crackers were made with the Koranic Pages”.

The police, with the greatest indignation for the Holy Cross, swiftly arrested Tariq and viciously beat him. Some Christians and Muslims intervened and pacified the officers, and even Khurram, the man who provoked the arrest, said he forgave him and that if he really did something wrong, God will punish him.

But Khurram’s seeming sympathy was feigned, and just four days later he filed a complaint against Tariq and his brother, and the former found himself yet again in chains.

But who has come to his aid? It was our organization, Rescue Christians, who visited him in prison, and is now his only support. Here is a message from our team on the ground in Pakistan:

We immediately filed the application in the court of Magistrate of Wazirabad for his medical, Doctors have given him a date of 27th December,2013 for proper medical checkup. We tried to get his check up today but due to the unavailability of the specialist we could not get it done.

According to our information he was tortured mentally and physically in the jail. However we have decided to file the protection petition for him as well, and we will submit our request for a change of jail .

When a Christian is thrown into prison, it is not just he who is confined, but Christ as well. Remember what Christ:

And what does Christ say to those who did not visit or tend to the persecuted in prison?

So I ask you, to please donate, and tend to the persecuted. This is your chance to do something for the persecuted, and know for certain that you are rescuing your brethren.

DONATE NOW TO SAVE CHRISTIAN LIVES.

Post “Arab Spring” Egypt continues exposing its true nature, including nowlegal persecution of Christians. Earlier this month, according to Fox News, Dimyana Abdel-Nour a “pale, young Christian woman sat handcuffed in the courtroom, accused of insulting Islam while teaching history of religions to fourth-graders.” Her accusers are 10-year-old Muslim children who say she “showed disgust when she spoke of Islam in class.”

According to Islamic law, the word of inferior Christians cannot stand against that of superior Muslims—even if they are resentful or confused children.

Released on bail, Dimyana is unable to talk and “suffering a nervous breakdown.”

Criminalizing blasphemy was enshrined in the country’s Islamist-backed constitution that was adopted in December. Writers, activists and even a famous television comedian have been accused of blasphemy since then. But Christians seem to be the favorite target of Islamist prosecutors. Their fragile cases — the main basis of the case against Abdel-Nour’s case the testimony of children — are greeted with sympathy from courtroom judges with their own religious bias or who fear the wrath of Islamists, according to activists. The result is a growing number of Egyptians, including many Christians, who have been convicted and sent to prison for blasphemy…. Part of the Salafis’ antagonism toward Christians is rooted in the belief that they were a protected group under Mubarak’s regime while they, the Salafis, were persecuted. Now empowered, they may be out to exact revenge on the Christians….

Indeed, before President Obama threw Hosni Mubarak under the bus in the name of “freedom” and “democracy,” Christians were at least legally protected: Muslim mobs were limited to lawless attacks on Christian churches and persons. But now that the Muslim Brotherhood and Salafis are in charge, Egypt’s Christians are now also experiencing legal persecution in the courtrooms, especially in the context of blasphemy.

The following cases of blasphemy laws targeting Christians, some of which were never reported in the West, represent a mere sampling of post “Arab Spring” Egypt. For many more such cases, including all around the Muslim world, see my new book Crucified Again: Exposing Islam’s New War on Christians (April, 2013, published by Regnery in cooperation with Gatestone Institute.

Human rights activist Magdi Khalil of Coptic Solidarity told me that in all these cases “Islamist prosecutors rely exclusively on circumstantial evidence. And the judges do not behave like impartial judges, but rather as demagogues haranguing an already frenzied mob, and then sacrificing the Copts to satisfy them. Nor do they allow any representation for the accused. Judges just show up and pass their verdicts in very brief mock trials.”

Such is the new Egypt that Obama helped create—despite all the glaring warning signs that it would develop just like this. Christian persecution in Egypt has gone from being a common, though technically illegal, phenomenon, to being widespread, and now legal.

Jihadist persecution of Christians around the world is one of the biggest under-reported stories in media circles, says a Christian activist and expert on the issue.

Raymond Ibrahim, a Copt from Egypt—now living in the U.S.—says that Western weakness in confronting radical Islam has left the jihadists feeling emboldened. In his new book, Crucified Again, Ibrahim presents firsthand knowledge and investigation of widespread persecution.

“Although Muslim persecution of Christians is one of the most dramatic stories of our times, it is also one of the least known in the West,” he writes.

Ibrahim’s own country of Egypt is experiencing a resurgence of violence towards Christians, thanks to the rise of the Muslim Brotherhood after the downfall of Hosni Mubarak.

Although the violence is spreading and intensifying, Ibrahim insists that many in the Western media, including Christian media, are not picking up on it.

“CBN has been great in reporting on this phenomenon and promoting the book. One senior CBN reporter, Gary Lane, said ‘While I’ve read many books about Christian persecution over the years, none of those I’ve encountered provide a better historic and contemporary context of Christian suffering in Muslim countries than Crucified Again: Exposing Islam’s New War on Christians.’ Unfortunately, most other evangelical churches and organizations have been indifferent and uncooperative about getting the story out on Christian persecution—and to this, I am at a loss.”

Ibrahim, a Shillman Fellow at the David Horowitz Freedom Center, and an associate fellow at the Middle East Forum, has some ideas about engaging American evangelicals in this gigantic issue:

“First, they need to acquire the proper knowledge of the situation—which is precisely why I wroteCrucified Again, to fill the vacuum the mainstream media has created by woefully failing to report the reality of Christian persecution under Islam. Christians should read the book, which makes everything clear, and addresses all the hows and whys. Even those who think they are aware of the situation will probably be overwhelmed by the reports in the book—the actual amount of persecution that goes on, and how widespread it is, from Morocco in the west to Indonesia in the east, from sub-Saharan Africa in the south, to Kazakhstan and Russia to the north, and even in European nations (as we recently saw with the London) beheading—a thing that happens often to Christians in the Islamic world.”

As for the Copts in Egypt, Ibrahim has direct knowledge of the growing danger:

“Things just keep going from bad to worse. Persecution and discrimination, which was present under the Mubarak era, are now, under the Muslim Brotherhood, becoming legalized. For example, in the context of ‘blasphemy’ charges against Christians.

Most recently, a young female Christian school teacher was arrested and awaiting a prison sentence because a couple of her 10-year-old Muslim students accused her of looking ‘disgusted’ when teaching Islamic history. But if you read the book, you’ll see that her case is the tip of the iceberg, as many other Copts have been incarcerated under the accusation that they ‘insulted’ Islam.