When Saddam was in power he kept control and stability in the Middle East; he kept Iran in check and struck fear into the hearts of all jihadists or anyone who planned on sedition. Now I know what you may be thinking: Saddam was a butcher, a tyrant–and you would be right. But, he was a leader perfect for the fierce Iraqi temper. The French philosopher Joseph de Maistre once wrote these wise and realistic words on how a form of government fits a people based on their nature:

For one nation, despotism is as natural and as legitimate as democracy for another.

With the ousting of Saddam came the arise of jihadism and chaos in Iraq (especially now with the Americans gone). The same is happening in Syria with the weakening of the Assad regime, and the fate of Iraq will be that of Syria’s if the dictator is disposed.

It has been reported that a Syrian bishop has been beheaded by Syrian jihadist criminals. Here is the video which is stated to capture this horrendous crime:

Syria has become a killing field of Christians, and the blood of saints can only be found on the hands of Allah the devil, Muhammad the heretic, and the United States and all of the Western allies who have been contributing to these gangs of ruthless heretics.

It was only last year that they discovered the body of a Syrian priest, Rev. Fadi Jamil Haddad, who suffered excruciating torture under the hands of sadists before he was killed.

Now these rufians–these followers of Lucifer–are overrunning the Middle East with their depravities and bloodlust violence against Christians. This is all because we have ousted out numerous dictators and weakened the political infrastructure of the Middle East.

Assad’s governance is adequate for the society and temperament of Syria, just Saddam’s rulership was fitting for the ferocity of the Iraqi populace. Some may argue that this is quite a ruthless thing to say, but such objections will have to be put up against the actual consequences of removing Saddam, and the obvious disastrous results that will occur if Assad is taken out.

Here are just some live examples: here is an old–yet rhythmic–piece of propaganda music for Saddam before he was executed:

Lets just call this video an old relic of pre-Saddam take out days. Now, just to give you a clue as to how Iraq has changed, here is a video from post-Saddam Iraq (you know, after “democracy” was established):

These terrorists would not have been tolerated under Saddam, nor under any pan-Arab dictator. Under the watch of America, countless Christians either left or were killed in Iraq. As of now, it has been reported that more than one million Christians have fled Iraq.

Now lets look to Syria, because the same thing that happened–and is happening–in Iraq is occurring in Syria. In the recent past my father and I have been forewarning on the revival of human sacrifice in the Muslim world (found here, here, and here), and now we are seeing it being systematically implemented against Christians in Syria.

Martin Janssen has recorded an account based on the testimony of Syrian Christians, in which the rebels reduced a Christian village to dhimmitude and threatened them with ritual human sacrifice:

Jamil [an elderly man] lived in a village near Idlib where 30 Christian families had always lived peacefully alongside some 200 Sunni families. That changed dramatically in the summer of 2012. One Friday trucks appeared in the village with heavily armed and bearded strangers who did not know anyone in the village. They began to drive through the village with a loud speaker broadcasting the message that their village was now part of an Islamic emirate and Muslim women were henceforth to dress in accordance with the provisions of the Islamic Shariah. Christians were given four choices. They could convert to Islam and renounce their ‘idolatry.’ If they refused they were allowed to remain on condition that they pay the jizya. This is a special tax that non-Muslims under Islamic law must pay for ‘protection.’ For Christians who refused there remained two choices: they could leave behind all their property or they would be slain. The word that was used for the latter in Arabic (dhabaha) refers to the ritual slaughter of sacrificial animals.

We will be seeing Syria moving from a country to a myriad of places for human sacrifice of Christians and others. This is the result of heresy, take away Christ the Life and you end with death.

And lets never forget about the murder of Father François Mourad, a monk of the Monastery of St. Anthony of Padua in al-Ghassaniyah.

Jihadists overran the monastery and when he came to the defense of nuns and others, he was murdered by the rapacious heretics. And some say that the Catholics and the Muslims are aligning together, to these same people I request that they see what the Muslims are doing to the Catholics in Syria and Iraq. With all of this chaos, I fear that we will be soon missing Assad.

While reading on such violence, such cruelty, such sadism, I cannot help but miss Saddam. 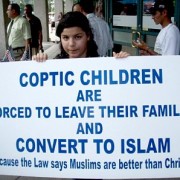 The Unnecessarily Tragic Tale of Robin Morris in Peshawar 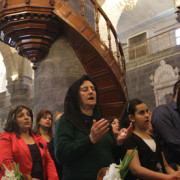 Christians Will Be Massacred If Assad Goes

The Murder Of Father Franҫois Mourad

Muslim Brotherhood Out, Killing Christians In