Articles
You are here: Home / Articles / Christian Persecution / Estimated 50,000 Christians Have Fled To The Mountains Of Syria, Or To… 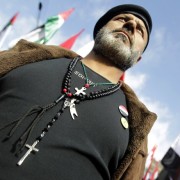 From George Marlin of Catholic Online:

For many months now there have been plenty of headlines devoted to the unrest in the Middle East, notably in Egypt and Syria. What has been missing, however, is any significant media coverage of the ongoing anti-Christian persecutions in those two countries. The world was just deliberating at the UN-silence. Where is the outrage?

The media seems indifferent or fearful of criticizing the criminal and terrorist activities of Muslim extremists-or journalists get the story plain wrong. Glaring case in point: a recent BBC report, covering the rebel attack on the ancient Syrian Christian village of Maaloula, claimed that “the fighting in Maaloula is the first such attack on a notable Christian community since the start of the uprising. Residents of many Christian villages around Homs and Hama have been fleeing the violence along with members of other communities, but had not up until now been attacked themselves.”

Yet, young Christian girls are being raped and murdered, while Christian churches, monasteries, homes, and workplaces are being systematically destroyed. Syrian Catholic bishops have warned that their country is becoming a “second Iraq” owing to similar patterns of Church attacks and forced expulsion and kidnapping of Christians. During Saddam Hussein’s reign of terror, Iraq’s Christian population plummeted from 1.4 million to fewer than 300,000. Many of those Christian refugees settled in Syria, which was considered, at that time, a more tolerant country.

According to Church sources, the major industrial city of Homs, home to Syria’s largest Christian population, has borne the brunt of violence. Attacks on Christian churches, schools, convents, as well as homes and businesses, have caused a mass exodus. It is estimated that 50,000 Christians, about 90 percent of the Christian population of Homs, have fled to the mountains or have sought refuge in Lebanon. Those left behind cannot find work and earn money to support their families. Food has been scarce and unaffordable. Before the start of the fighting in Syria, the Christian community accounted for some 10 percent of the Syrian population of 22 million.

With this I am reminded of Judges 6:2:

And the hand of Midian prevailed against Israel: and because of the Midianites the children of Israel made them the dens which are in the mountains, and caves, and strong holds.

Persecution of Christians in the Islamic world – May 2012

Iran. Government to be launching a new wave of persecution against Christians.

Australia. Three-day festival for 20,000 Muslims – chief attraction is a Saudi imam who has called for violent jihad.

Nigeria. Death toll from the bombings on three churches has risen to 63.

Libya. authorities continue to imprison Christians under accusations of proselytization.

Syria. Churches are being destroyed and Christians are being killed, tortured, used as human shields, and raped.

Syrian Christians Take Up Arms And Fight Back