Articles
You are here: Home / Articles / Christian Persecution / Egypt. The Arab Spring is in danger of becoming a winter for Christian…

Almost a year ago a wave of revolutions started in the Middle East, with Tunisia the central country where the first regime tumbled.

Called the “Arab Spring,” repressive governments crumpled like dominoes, changing the landscape of the Middle East and North Africa forever and sending shockwaves around the world.

Unfortunately for the already minority Christian population in Muslim-dominated countries like Egypt, Libya and Tunisia, the future is all but clear. Will 2012 bring more persecution and marginalization for Christians or greater liberty to worship?

So far, the signs are not encouraging, according to Open Doors USA President/CEO Dr. Carl Moeller.

“Many hail this movement of popular discontent that has toppled dictators as victory for democracy,” Moeller says. “But within Arab Spring are troubling incidents against Christians, even those in countries yet unreached by the revolutionary wave. For Westerners, the notion of democracy is majority and minority groups working together, each having a voice at the table.

“But the model unfolding in these lands is far from Jeffersonian. A possible result is the law of mob rule, where Islamists are likely to control governments, exclude minority faiths even from police protection, and Christians live in constant terror from the clear message: There is no place here for Christians.”

Moeller adds that the current situation in Egypt where the Islamists’ Muslim Brotherhood is holding an estimated 40 percent of the seats in the parliamentary elections so far is a reality check for Coptic and evangelical Christians, who comprise 10 percent of the population. Hardline Salafists are also doing well in the on-going election.

Moeller adds: “There have been significant reports of increased violence against Christians. We know Christians whose churches have been burned, and thousands who have been affected by extremist groups.

“Hopefully a new government will produce more protections for the Christians, but that’s not necessarily something that people are expecting. Many are fearing that there will be a decrease in the capacity of Christians to freely exercise their faith, as well as further restrictions on their public activity.”

Likewise, the Simon Wiesenthal Center has repeatedly spoken out regarding the plight of Egypt’s largest minority.

“For hundreds of years, Jews have known persecution, both political and religious,” says Simon Wiesenthal Center, Rabbi Yitzchok Adlerstein, Egypt, Christians, Director of Interfaith Affairs for the Simon Wiesenthal Center. “We know the particular virulence of the latter, and we therefore fear for Egypt’s Copts. They have suffered discrimination for decades as a vulnerable minority. What they face from a resurgence of Islamist fervor is something we would like not to think about, but moral outrage leaves us no choice.

“The Simon Wiesenthal Center has asked Egypt’s interim government to demonstrate its commitment to her Christians by a visible and demonstrable security presence to protect her communities and institutions. It has tried to persuade the world community to measure the success of Egypt’s experiment with democracy – as well as those of other countries that have thrown off the yoke of dictatorship – first and foremost by how well she guarantees religious liberties. Egypt is not Syria. It will respond to wall-to-wall pressure from the West. It is the job of all with a conscience to ensure that this pressure is applied.”

A Coptic Christian recently told a visiting team from Open Doors that “we have lived side by side with Muslims for many decades without problems, but a lot of these extremists hold very radical views and are not afraid of using violence. It feels we are going backwards – moving in the wrong direction.”

Some Christians have already left Egypt and others are preparing to leave. According to Moeller, a mass exodus of Christians from Egypt would be disastrous.

“Thousands of Christians have either left Iraq or fled to the northern part of the country due to the violence against them by Muslim extremists,” he states. “There were almost 1 million Christians in Iraq in the early 1990s but now only an estimated 345,000,” he states. “Pray that does not happen in Egypt….that there is not another religicide.”

Another Christian in Egypt made the following request to the Open Doors team while saying goodbye:

“Thank you for coming. It was a great encouragement and it really meant something for us. Please remember us in your prayers and ask believers in the West to pray for us. We need your prayers. We need to be one in Christ in this challenging chapter of our history. My wife and I want to stay here, but we know it will not be easy. Please, do not forget us and leave us alone.” (Open Doors) 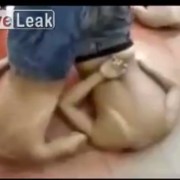 Egypt. Christians vote for Shafiq because they are fearful of the Brotherhood’s “hidden agenda”.

Pakistan. Appeal for Christian girl kidnapped and forced to convert to Islam

Egypt. Army foiled attack on church in North Sinai on the eve of Coptic Christmas.