Global Peace Index has recently released a report on global ranking of countries according to their dangerousness, a dozen African countries are among the most affected by war, terrorism and political instability; but Rwanda is not on the list and is positioned among safe ones.

Since 2007, the Global Peace Index, conducted by the Research Institute of Economics & Peace, class 153 countries of the safest most dangerous. Countries affected by civil wars for years, or face regular violence, are part of the top 10 African countries most dangerous.

The ranking evaluates, among other things, the risk of renewed fighting, the resurgence of political instability and terrorist threats. Among the top ten ranked to be dangerous Ethiopia is ranked the Ten (10) on the list.

Strategy Guides Africa Engagement, Defense Official Says IFJ Urges UN Human Rights Council to Act On Journalists’ Summary Killings Report More than ten years after the war that opposed to Eritrea, Ethiopia still maintains a tense relationship with the country and conflict: the Ethiopian government has not fully withdrawn its troops from Badme area, the north, and attributed to Eritrea, although the International Court of Justice has precisely defined the borders of both countries.

Ethiopia is also home to separatist movements: the Oromo Liberation Front, which affects the most populated region of Ethiopia to the southwest and the birthplace of important natural resources, the National Liberation Front in the Ogaden, based east on the border with Somalia, has an armed wing, Said the global peace ranking.

Burundi has experienced a civil war for fifteen years because of opposition Tutsi and Hutu rebels. Following a cease-fire, the Hutu rebels of the National Front for the Liberation became a political party. The 2010 elections were fire-proof: the boycott of presidential elections by the opposition and the return of violence show that the country is still far from stability.

Zimbabwe has experienced a wave of violence after the disputed presidential election in 2008: Robert Mugabe and Morgan Tsvangirai, his main rival, both claimed victory in the first round of elections. The situation has eased in 2009 with the establishment of a system with two-headed as president, Robert Mugabe and Morgan Tsvangirai as Prime Minister.

In 2010, attempts by the Prime Minister to develop the Constitution have been sabotaged by the camp of Robert Mugabe. Public meetings were banned, arbitrary arrests, looting and ransacking, have pushed the country into violence.

Chad has significantly improved its position by improving relations with neighboring countries. Several agreements signed between 2009 and 2010 led to pacify the country. The political situation has also stabilized.

The instability still reigns in the center and south of the country where the reelection of Good luck Jonathan has not changed. Nigeria, the most populous country in Africa with 155 million inhabitants, is marked by a religious conflict at the center, near Jos, where the killings of Muslims and Christians have killed nearly 20,000 people during the last decade.

But religion is not the only reason for conflict and economic needs have led to the southward migration of landless farmers Christians.

Other economic battle in the Niger Delta in the south: the Nigerian government is facing a terrorist group, the Movement for the Emancipation of Niger Delta (MEND), which attacks the facilities and personnel of oil companies. Kidnappings of expatriates and attacks on oil pipelines are their predilections, negating attempts Armistice incurred by the State.

Following the Arab Spring came in February 2011; Libya has entered into a civil war. The protests led to the downfall of the authority of Muammar Gaddafi in the east. Since then, international intervention under the authority of NATO has still not managed to restore calm in the country.

New entry in the standings: the Central African Republic. The presidential elections have created an environment of tension and unrest within the country. The presence of rebel groups in the border area with Sudan and Chad is also problematic.

Despite the signing of a peace agreement in 2008, some groups have not signed the agreement, are still active. In south-east, the troops of the Lord’s Resistance Army (LRA) led by Joseph Kony, continue unabated.

This group is part of the most violent in the world, has expanded internationally and is present in the DRC and southern Sudan, where he is engaged in looting and

The problems of the Democratic Republic of the Congo residing in these activities at the border of its territory and the presence of several armed groups and terrorists in the east. It is mainly in Kivu, in the Great Lakes region, the situation is more difficult. The origin of the conflict: the massive influx of refugees after the Rwandan genocide. An improvement is noted, however, about the tensions between the forces of the national army (FARDC) and the Democratic Forces for the Liberation of Rwanda (FDLR) on the dominance of territory and resources.

The attempt to integrate SPDC to the regular army and the cease-fire of 2008 is ineffective because regularly violated.

To the east, the Allied Democratic Forces-National Army for the Liberation of Uganda (ADF-NALU), Ugandan rebel movement, is in conflict with the Congolese government. This group is related to the Shabab Somali fundamentalist Islamic group linked to al-Qaida.

2 – Sudan: a multitude of conflicts

The situation in Sudan has worsened from 2010. The country suffers from two years of internal conflict have serious consequences both human and political. To the west, the conflict in Darfur has killed 300,000 people, including those due to famine and disease, and 2.7 million displaced since 2003. Peace, signed in 2006 between the government and the rebel Justice and Equality Movement (JEM), one of the strongest rebel groups, is fragile because all factions did not sign. The UN presence is still needed.

In the South, thanks to self-determination referendum in 2011, the conflict in Southern Sudan is in the process of healing. However, the situation in Abyei, remains uncertain.

1 – Somalia: a generalized civil war for over twenty years

Since 1991, Somalia is facing a civil war difficult, the conflict between the Transitional Federal Government, supported by the UN, and several groups of Islamist rebels, some of which are close to al-Qaida.

Unrecognized within the territory of Somalia, the government of Sheikh Sharif Sheikh Ahmed cannot impose his reforms across the country. The only piece of territory it controls is part of the capital Mogadishu, the scene of regular fighting between both sides to maintain control.

Over 1.9 million people or over 20percent of Somalis under the Office of the United Nations for Refugees (UNHCR) have fled the country controlled by fear. Stabilizing the country still seems impossible. 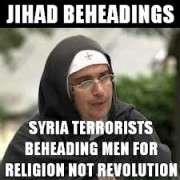 Acts of violence Christians in Indonesia almost doubled in 2011

Egypt. “For Christians, The Revolution Was A Bad Event”

Israel/Gaza. UN vote paved the way for creation of radical Islamist state to advance their goal of wiping Israel off the map.